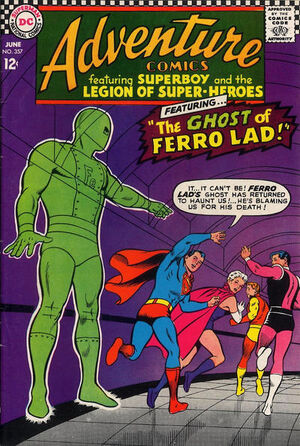 Appearing in "The Ghost of Ferro Lad"Edit

Synopsis for "The Ghost of Ferro Lad"Edit

Superboy, Princess Projectra, Sun-Boy, and Cosmic Boy travel to Shanghalla, the asteroid that is the final resting place for heroes all over the universe to pay their respect to their fallen comrade Ferro Lad. As they are doing so, a strange object in space flies to the Legion of Super-Heroes club house and embeds itself into the central control panel. When the Legion returns to their club house afterward, Superboy asks to be left alone and sends the others back to their homes.

Let alone in a trophy room commemorating Ferro Lad, Superboy recalls how Ferro Boy grabbed the device that Superboy was going to use to destroy the Sun-Eater and sacrificed himself to destroy the creature. Guilt ridden, Superboy wonders if he subconsciously allowed for Ferro Lad to die not wishing to sacrifice himself. Cosmic Boy's thoughts are also full of guilt over Ferro Lad's demise making him unable to focus on playing with his brother or concentrate on anything. That night as he sleeps Cosmic Boy is haunted with visions of Ferro Lad accusing all the members of the Legion for allowing him to die.

At 3 in the morning Cosmic Boy is awoken by Sun Boy who has picked up a distress call at the Clubhouse. Rushing there with Sun Boy and Princess Projectra, they find that Superboy is being attacked by an unseen force that is causing items to levitate and strike him. Chief among these items is a chunk of green Kryptonite that threatens to kill the Boy of Steel. The Legion members attempt to stop the objects, destroying the Kryptonite in the process. Going to his weakened friend Cosmic Boy learns to his horror that Superboy was apparently attacked by the ghost of Ferro Lad. Suddenly one of their machines explodes and after the smoke clear they find a written warning from the ghost of Ferro Lad, vowing to get revenge for his death.

Superboy calls in Saturn Girl and Brainiac 5 for help trying to solve the mystery, however at first the two Legionaries are hard to believe that they are being haunted by a ghost. Humoring them, they start to take things seriously when they see the damage done. Still convinced that the group is suffering from a mass hallucination, he secretly puts a scrambler device on Princess Projectra and sends the group off to rest while he stands watch. Later, Princess Projectra enters the room to relieve him when suddenly she sees the ghost of Ferro Lad. She summons the alarm calling in all the other Legion members, who can all see Ferro Lad's ghost except for Brainiac and Saturn Girl. When the apparent illusion is cut off, Saturn Girl is struck by a powerful mental force and the Legion finds that Ferro Lad's belongings have been destroyed.

Deciding to contact Ferro Lad and see what he wants, the Legion prepares a seance on Princess Projectra's insistence and direction. To Brainiac's surprise when they complete the ceremony, they manage to summon what indeed appears to be the spirit of Ferro Lad. The angry ghost demands that the Legion disband and leave the Earth as punishment for allowing him to die. Much to Brainiac's utter disbelief the group decides to honor this request and and order the Legion to disband and the group all part company.

As it turns out, they have not been haunted by the ghost of Ferro Lad at all, but a member of the Controller race who has been manipulate the Legion into disbanding the Legion. As Superboy attempts to fly back to his native 20th Century, he is struck with an alien ray that immobilizes him and transports him to the Controller's lair. There the Controller explains that he is a member of a group who hail from another time-space continuum. Their mission was to safeguard different time periods and sectors of the universe. This particular Controller would create the Sun-Eater to prevent intergalactic war, and would direct the device to solar systems where just such conflicts might erupt. However, the Controller would soon grow corrupt and decide to try and take over the universe by initiating universal turmoil and using a device to take control of everyone's minds.

Taking on a new plan, he decided to start by taking over the Legion for himself and then taking over the rest of the universe, starting with Superboy. However, before the Controller can steal Superboy's mind, Superboy manages to activate his Legion ring calling his fellow Legionaries to the rescue who send the Controller fleeing to avoid capture. Locking himself in a room, he attempts to detonate the chamber that the Legion are in when he is confronted by the real ghost of Ferro Lad, who frightens the Controller so badly he dies of fright. When the Legion breaks into the room, they find the Controller dead, and many unanswered questions, like how Superboy might have activated his Legion ring if he was completely immobilized. As they leave they are not the least bit aware that they were helped by their fallen comrade from beyond the grave.

Retrieved from "https://heykidscomics.fandom.com/wiki/Adventure_Comics_Vol_1_357?oldid=1399488"
Community content is available under CC-BY-SA unless otherwise noted.