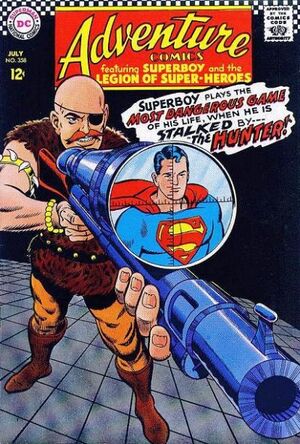 On the jungle planetoid Simballi, the billionaire financier known as the Hunter traps and kills a beast called a tiger-ram. That night, at a great feast in his castle, the Hunter expresses boredom and dissatisfaction with his existence to his assistant, lakra. He has trapped and killed the deadliest beasts in the galaxy, but he craves even more dangerous game. Pulling back a curtain to reveal plastic heads of the Legion members mounted on a wall, he tells lakra that the Legionnaires will be his next conquest.

Ships from Orion Enterprises land at spaceports all over Earth, each containing vicious animals from the Hunter's private zoo. When the time is right, the Hunter issues a threat to the Legion by forming words in the sky. The heroes on duty at the Clubhouse, Superboy, Invisible Kid, Chameleon Boy, Karate Kid, Ultra Boy, and Shrinking Violet, fly over the city but fail to discover the source of the threat. The Hunter then has his animals released, and as they swarm over Metropolis, the heroes do their best to stop them. The Hunter appears, offering to halt the stampede if the Legionnaires will surrender to him. Since their efforts to quell the beasts have failed, the heroes reluctantly agree, and watch in amazement as he stops the creatures with a simple spoken command.

Arriving on Simballi, the Legionnaires are thrown into a jail cell and watch as the Hunter, confident of his forthcoming victory over them, holds a feast of the kill before the following day's events. Later that night the heroes try to escape, but find that the "run-down cell" they occupy is escape-proof, and that the Hunter, despite outward appearances, is really a scientific genius.

The following morning, the Hunter outlines his rules to the Legionnaires: he will use any means of hunting he desires to capture the heroes as they make their way through the jungle to a totem pole on a native sacrificial mountain twenty miles north of their starting point. They need only touch the pole to win safety. Given a fifteen-minute head start, the Legionnaires race into the jungle. At Invisible Kid's suggestion, Superboy flies towards the pole to win his own safety, but the Hunter has a falcon-like bird drop a Green Kryptonite net on the Boy of Steel, causing him to drop helplessly into a clearing below. The remaining Legionnaires split up to avoid capture, but the Hunter defeats them one by one, despite their powers. The lone remaining Legionnaire, Invisible Kid eludes scouts, patrolling air-cars, sensor-dogs, and reaches the mountaintop where the totem pole stands. He begins climbing, only to be blasted by the Hunter, hovering close by in an air-car. The Hunter orders him to surrender, but he refuses, and the energy barrage increases as he climbs. He finally touches the pole, and at the same moment an explosion causes the Hunter's ship to crash.

This story was partly inspired by Richard Connell's short story, The Most Dangerous Game.

Retrieved from "https://heykidscomics.fandom.com/wiki/Adventure_Comics_Vol_1_358?oldid=1399489"
Community content is available under CC-BY-SA unless otherwise noted.