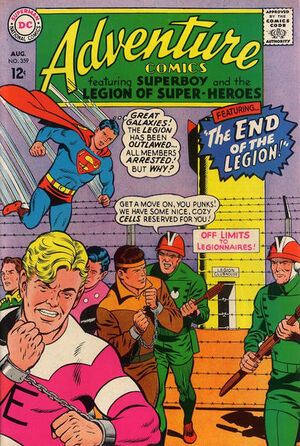 Appearing in "The Outlawed Legionnaires!"Edit

Synopsis for "The Outlawed Legionnaires!"Edit

The entire Legion is away from Earth on various missions. When they return, a Science Police squadron escorts their cruisers to Metropolis Spaceport, where they are informed that their club has been disbanded by the United Planets Council. The heroes find their Clubhouse barricaded, and are thrown into jail for violating a curfew.

Duo Damsel's parents bail her out and tell her that the President of Earth has died in a road accident, and has been succeeded by Kandro Boltax, the Vice-President, who has brought in an entirely new cabinet. His first bill, for a new water purification plant, was passed, and his second one, to outlaw the Legion, was also approved some days later. Duo Damsel informs her comrades of all this, and the Legionnaires gather in front of the Metropolis Midtown Terminal the next day. There Dream Girl predicts that a monotrain will fall, and the heroes, Colossal Boy, Superboy, Mon-El-Element Lad, Light Lass, Matter-Eater Lad, Saturn Girl, and Ultra Boy, go into action to save it when the disaster happens seconds later. However, disguised Science Police officers arrest the group, who are sentenced by a judge to hard labor on Takron-Galtos, the prison planetoid.

The remaining Legionnaires, who are forbidden to use their powers or wear their costumes, are later attacked by a group of young toughs. Princess Projectra, the one member with the political influence to resolve their plight, is injured in the fight. Later, Invisible Kid finds that his parents have attached a bugging device to his view-phone. Shocked, he resorts to his secret communicator and contacts Brainiac 5, who suggests that everyone on Earth is being controlled, and that their benefactor, R. J. Brande, is their only chance. On Takron-Galtos, the imprisoned boy Legionnaires are forced to labor in a jewel mine, while the girls work in a laundry. Saturn Girl's powers have told her the truth of the situation on Earth, but an invisible barrier stops her thoughts from leaving the planetoid.

When the free members call on R. J. Brande, he refuses to listen, and summons his guards. The heroes fight their way out, but Lightning Lad, Duo Damsel, Sun Boy, and Cosmic Boy are injured and left behind in the melee, while the others reconnoiter in an underground sewer. There they vow to form a secret resistance movement to discover the person behind all this.

Retrieved from "https://heykidscomics.fandom.com/wiki/Adventure_Comics_Vol_1_359?oldid=1399490"
Community content is available under CC-BY-SA unless otherwise noted.