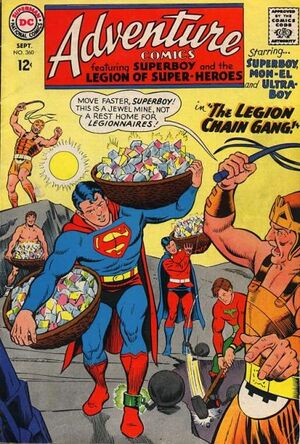 Appearing in "The Legion Chain Gang"Edit

Synopsis for "The Legion Chain Gang"Edit

The Legionnaires wander through the maze of sewers, where they discover a hidden passageway leading to one of Lex Luthor's secret lairs. Using his advanced machinery, they recreate their costumes and eat, then lay plans to free Cosmic Boy, Sun Boy, Lightning Lad, and Duo Damsel from jail. At the same time, President Boltax receives a report from Brugol, the warden on Takron-Galtos. Boltax then visits his son, whom he keeps prisoner in a locked room. The boy refuses to speak to him, and after Boltax leaves, he loosens the screws on a ventilator grill and escapes.

Meanwhile, the Legionnaires, under the leadership of Espionage Squad chief Chameleon Boy, successfully free their captive comrades from jail and retrieve their confiscated flight rings, then regroup at Luthor's lair. They deduce that Earth's water supply has had a hypno-chemical put into it, and Brainiac 5 concocts an antidote. At the water purification plant the next day, the Legion creates a distraction to divert the guards, while Brainiac 5 goes to pour his antidote into the water. In the melee that follows, Brainiac 5 is slugged from behind by a guard, but is saved by Bettax's son. He blows up a tank, causing the antidote-treated water to rain down on the guards, freeing their minds from Boltax's control.

Boltax is captured and revealed as a disguised Universo. His son, Rond Vidar, explains his father's scheme to the Legionnaires, and all return to the Clubhouse. The imprisoned members on Takron-Galtos, who have freed themselves and arrested Brugol, return to Earth. Rond Vidar is awarded honorary Legion membership for his courage.

Retrieved from "https://heykidscomics.fandom.com/wiki/Adventure_Comics_Vol_1_360?oldid=1399491"
Community content is available under CC-BY-SA unless otherwise noted.