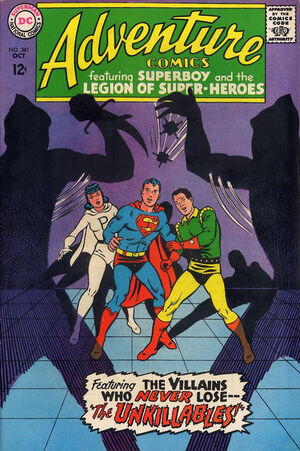 After two decades of war between the United Planets and a confederation of worlds called the Dominion, the latter sues for peace. As anti-Dominion feelings run high on Earth, the President calls upon the Legion to ensure their ambassadors' safe arrival. The heroes are sent to the neutral planet, Politor, where they meet the Dominators, a race characterized by blue skin, baldness, and round white discs on their foreheads which signify rank. Under orders from the President, the Legion is to transport the Dominators' ambassadors through the 10th dimension. This is a sub-universe in which a billion-mile trip is reduced to only five hundred miles. Meanwhile, a costumed group of villains called the Unkillables prepares to attack. They enter the 10th dimension, intending to strike and weaken the caravan at periodic intervals before finally destroying it. As the journey begins, the Legionnaires stop an arranged avalanche before making camp for the night. Shortly afterward, the Unkillables strike, destroying the party's supplies. Since Star Boy, who had been on guard duty, was distracted by a Dominator just as he was attacked, the heroes conclude that one of the ambassadors is aiding the Unkillables. As the final stretch begins, the Unkillables suddenly launch themselves at the entourage from volcanic craters. The Legionnaires, weary from their constant vigilance, fight back. The leader of the Unkillables then produces his ultimate weapon, a ray which causes the Legionnaires' powers to be switched at random from member to member. In the resulting confusion, he hurls a suspended-animation bomb at the Dominators. Brainiac 5, now possessing Superboy's powers, blows it back at him, and it explodes, paralyzing the villain. The leader is then revealed as the Dominators' deposed ruler, who sought to use the Unkillables for revenge. The Unkillables, who are found to be descendants of infamous assassins in Earth history, were turned into killers by one of his machines. As the Legion returns to Earth, the Dominators reveal that they are actually three-dimensional images, and that the real aliens have already reached Earth.

Retrieved from "https://heykidscomics.fandom.com/wiki/Adventure_Comics_Vol_1_361?oldid=1399492"
Community content is available under CC-BY-SA unless otherwise noted.