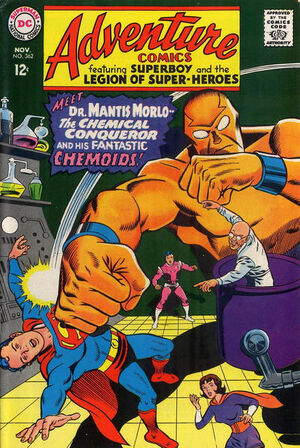 When Brainiac 5's instruments indicate that deadly gasses are poisoning Earth's upper atmosphere, the Legion investigates and traces their source to Dr. Mantis Morlo's orbital laboratory, where Morlo has his huge Chemoid, Gorn, attack the heroes. The Legion defeats the android and destroys all of Morlo's equipment before departing. However, Morlo has still more equipment safely hidden, and thus resumes his work, as the Legionnaires return to Earth, thinking about their previous encounter with him. A research chemist, Morlo had run an acclaimed series of experiments on thought-process chemical kinetics, until it was learned that he had used human slaves as guinea-pigs in his work. The Legion easily arrested him at the time, and he had vowed revenge, a threat he had never carried out. Later, simultaneous word of trouble is received from the planets Daxam, Orando, and Naltor. The Legion splits into groups with Mon-El, Princess Projectra, and Dream Girl leading the missions to their home planets. On Orando, Princess Projectra, Karate Kid, Superboy, Light Lass, Cosmic Boy, Bouncing Boy, and Brainiac 5 are brought before the king, Projectra's father. Black smog is surrounding the planet, and since Orando has no industry, its source is a mystery. Superboy creates a whirlwind to disperse the smog, and Brainiac 5 collects a sample for analysis. Using an alchemist's den, he traces the poisons to Dr. Mantis Morlo. Racing to the spot on Orando where the smog is thickest, the Legionnaires find Morlo waiting for them in his flying citadel, and he orders his Chemoids, specially built for battle, to attack the heroes.

Retrieved from "https://heykidscomics.fandom.com/wiki/Adventure_Comics_Vol_1_362?oldid=1399493"
Community content is available under CC-BY-SA unless otherwise noted.