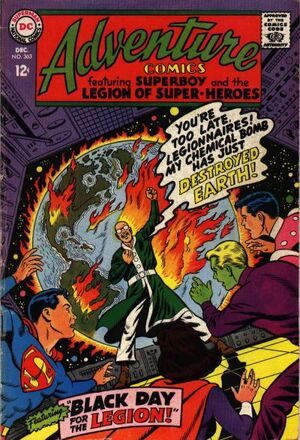 Appearing in "Black Day for the Legion!"Edit

Synopsis for "Black Day for the Legion!"Edit

Fighting back, the Legionnaires defeat Morlo's Chemoids and capture the villain, while Superboy destroys the smog-maker. However, Morlo breaks free and leaps off the platform into a dense forest below, where Superboy's X-ray vision fails to spot him. Meanwhile, Mon-El's party, including Element Lad, Sun Boy, Saturn Girl, Colossal Boy, and Lightning Lad, approaches Daxam, and is greeted by a deadly rain of alkali hailstones and ball lightning. Similar chemical stones have razed all major cities there, and the Legion learns that Mantis Morlo, operating from an undersea base in the Sea of Omal, is responsible. The heroes penetrate his base and destroy all his weaponry, but the villain escapes in a submarine. At the same time, Dream Girl and her comrades, Star Boy, Invisible Kid, Ultra Boy, Matter-Eater Lad, Chameleon Boy, and Phantom Girl, greet the High Assembly of her world, Naltor. They inform the Legionnaires that artificially induced food contaminates have given the populace bad dreams, and have thrown them into a panic. Ultra Boy flies into space, where he uses his penetra-vision to "peel" Naltor, layer by layer, until he finally finds the base of Mantis Morlo at its very core. The Legion rushes to capture him, but he succeeds in escaping. Chameleon Boy, whose antennae tingled when he stood near Morlo, stops the others from pursuing him. During all of this, the real Dr. Morlo is safely ensconced in his orbital laboratory. He gloats over his victories, having used Chemoid doubles of himself to create disasters to lure the Legion to some of their home worlds. His real target is Earth, and he paints a target on the globe, then launches a bomb to burn the planet to a cinder.

The Legion arrives en masse to inform him that he has actually destroyed a mock Earth. Chameleon Boy had deduced Morlo's scheme when his antennae, which record precise details of people or objects, detected subtle differences in the Morlo android. He then masqueraded as Morlo's Chemoid assistant, Gom, and secretly aimed his weapon at the fake Earth, which Superboy and Mon-El had hastily constructed. Morlo, crushed, is taken into custody.

Retrieved from "https://heykidscomics.fandom.com/wiki/Adventure_Comics_Vol_1_363?oldid=1399494"
Community content is available under CC-BY-SA unless otherwise noted.