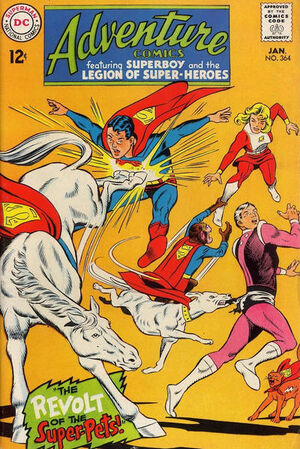 Appearing in "The Revolt of the Super-Pets!"Edit

Synopsis for "The Revolt of the Super-Pets!"Edit

The animal members of the Legion of Super-Pets are playing in space when they detect remote-controlled crime machines headed for Earth. The Pets destroy the machines and fly to the Legion Clubhouse to warn the Super-Heroes, only to have the Legionnaires chastise them because they failed to trace the weapons to their point of origin. Leaving the Super-Pets and Saturn Girl to guard the Clubhouse, the heroes attempt to trace the machine's trail themselves. Upset over this treatment, the Pets depart after Saturn Girl gives them a telepathic charge so that they can communicate with each other. The Super-Pets soon meet Rikkor Rost of the planet Thanl, who informs them that his world worships them, and hopes that they will accept his offer of a permanent home there. They accept, and he teleports them to Thanl. Meanwhile, the Super-Heroes return to the Clubhouse to inform Saturn Girl that their attempt to trace the machines proved fruitless, and that they want to apologize to the Super-Pets. She leads them to Thanl, where the heroes note the many statues honoring the Pets. They find that the animals are now reluctant to leave, and when Chameleon Boy rashly grabs Proty, demanding his obedience, the Pets fight back, and send the defeated Legionnaires back to Earth. Rikkor Rost suggests that the heroes may further plot against them, and so Super-Horse, now human because a comet is passing Earth, and a disguised Proty join the Legion as two new members, Biron the Bowman and Blockade Boy. The two are assigned the task of discovering the origin of the crime machines, and after the others depart, they use the Legion's computer to trace the weaponry to the planet Thanl. Comet and Proty return to face the Thanlians in a show-down, and the heroes arrive shortly afterward to assist the Pets in defeating them. The two Legions are reconciled, and all earlier differences are forgiven.

Retrieved from "https://heykidscomics.fandom.com/wiki/Adventure_Comics_Vol_1_364?oldid=1399495"
Community content is available under CC-BY-SA unless otherwise noted.