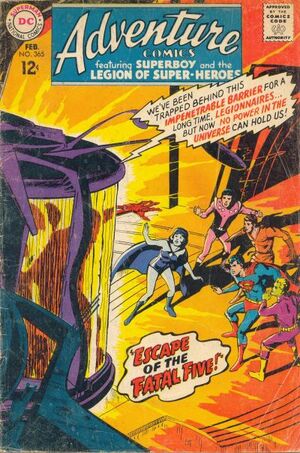 Appearing in "Escape of the Fatal Five!"Edit

Synopsis for "Escape of the Fatal Five!"Edit

When the peaceful planet Talok VIII becomes a belligerent, warlike world, the United Planets Director calls upon the Legion to investigate. The world's heroine, Shadow Lass, who had been off-planet on a mission, accompanies four Legionnaires, Superboy, Brainiac 5, Cosmic Boy, and Karate Kid. As Talok's warlords have completely sealed off their world, the five heroes parachute into a barren desert, intending to make their way into Talok's capital, which they do despite obstacles placed in their path by the mysterious agency behind Talok's transformation.

Gaining entrance to a fortress, the heroes are struck by rays which teleport each into a death-trap. Karate Kid finds himself trapped inside a gigantic, hollow diamond. Cosmic Boy encounters five large, non-magnetic, metal balls which rush at him in a short hallway, Superboy is slowly being crushed in a tiny sphere, Brainiac 5 is imprisoned in a small chamber with spiked walls moving in on him, and Shadow Lass appears in a room flooded with bright, glaring lights, which weaken her darkness-casting power and can eventually kill her. In the citadel throne room, the mysterious villain and his lackey watch as the imperiled heroes summon every ounce of strength and ingenuity to escape the traps.

All of that energy is collected into gigantic batteries, and the lackey now uses it on the barrier imprisoning his master to crack it. The barrier falls, and out of a dimensional warp step the Fatal Five. After being blasted there following their partnership with the Legion against the Sun-Eater, they had found Talok VIII through a dimensional window. Tharok had mentally enslaved its populace with a mind-control unit and turned it into a warlike world, knowing the Legion would investigate. As the freed Legionnaires rush to the citadel's throne room, the Fatal Five depart in a ship, leaving the exhausted heroes to face an army of Talokian warriors.

Retrieved from "https://heykidscomics.fandom.com/wiki/Adventure_Comics_Vol_1_365?oldid=1399496"
Community content is available under CC-BY-SA unless otherwise noted.