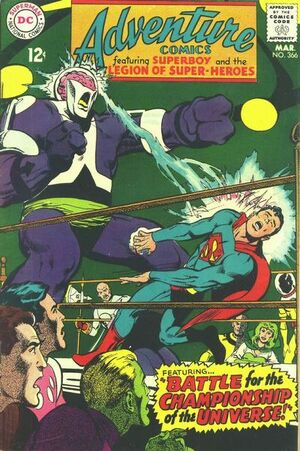 Appearing in "The Fight for the Championship of the Universe!"Edit

Synopsis for "The Fight for the Championship of the Universe!"Edit

The Legionnaires are almost defeated by the Talokian army, until they accidentally smash the mind-control machine, whereupon the warriors stop fighting. The heroes then leave Talok to pursue the Fatal Five.

Meanwhile, traveling through space, the villains debate what to do now that they are free. Tharok threatens to loose Validus on the other three unless they obey him, and he outlines his plans. Later, in Metropolis, the Five wreak havoc throughout the city, decoying the police, and leaving Tharok free to attack the Presidential Palace. The Persuader similarly attacks the 30th century equivalent of the Pentagon, and before long Metropolis is under the evildoers' complete control.

The Five make their headquarters in the Presidential Palace, and when the Persuader complains to Tharok that the United Planets could attack soon, he responds by unveiling the Universal Weapons Control Panel, which controls every defensive weapon of every planet in the U.P., and which the Five can now control if they can gain the third of three control keys, which rests in the Legion Clubhouse. The villains find the Clubhouse deserted, but when they attempt to break in, the five heroes who have returned from Talok VIII suddenly blast them back. Validus hurls a piece of pavement at them, and the Five fence them inside the Clubhouse with atomic barbed wire, demanding the third key, or their lives.

Deciding not to destroy the third key, the heroes make plans to "hold the fort" until help arrives. Suddenly, a blast nearly caves in the Clubhouse walls, and they realize that Validus, under Tharok's control, is blasting them with his mental lightning. Brainiac 5 hooks up his belt to the force blaster to project a force shield around the Clubhouse, and tends to Shadow Lass, who suffered a sprained arm and shock during this second attack. Meanwhile, the Fatal Five fail to break through the force shield, and Tharok contacts the Legionnaires to offer an ultimatum: they must give the villains the key or they will destroy Metropolis. The heroes confer, and contact the villains to reject both terms; instead they offer a fight to the finish, winner take all. Shadow Lass offers to join, evening the sides, and is sworn in as a Legionnaire just before the battle begins.

The five villains pair off with their hero "victims" and quickly gain the upper hand, but Shadow Lass knocks out the Emerald Empress and casts a deep shadow over the area, which allows her comrades to escape. Just as the Fatal Five prepares to strike again, the U.P. forces finally arrive, and the villains escape in a swift Legion ship. The President of Earth decorates the five Legionnaires for their bravery, and the heroes then turn to the matter of rebuilding the ruined Clubhouse.

Retrieved from "https://heykidscomics.fandom.com/wiki/Adventure_Comics_Vol_1_366?oldid=1399497"
Community content is available under CC-BY-SA unless otherwise noted.