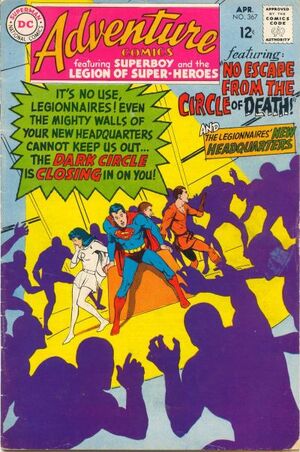 Appearing in "No Escape from the Circle of Death!"Edit

Synopsis for "No Escape from the Circle of Death!"Edit

As construction progresses on the new Legion Headquarters, Karate Kid greets Brainiac 5 and Sun Boy with the news that he is about to depart to Japan for a much-needed vacation. After the three tour the complex, Karate Kid takes his leave, while his comrades examine the many items they have received as housewarming gifts, including one marked in an indecipherable alien language.

Meanwhile, a mysterious group called the Dark Circle spies on Earth from halfway across the galaxy, and decides that now is the time to strike. As Karate Kid arrives in Tokyo and visits his aged mentor, a blast from outside tears a hole in the wall of their building and nearly kills them. Karate Kid stares through the hole to see an army of alien invaders. He fights back, but is overwhelmed by sheer numbers. His attempt to contact his fellow Legionnaires and obtain assistance is useless, as they too are fighting the aliens, who are appearing all over Earth.

At Legion Headquarters, the Legionnaires fight valiantly, but are eventually taken captive. Only Brainiac 5 escapes, and since the Legion arsenal is under close guard, he sneaks into the storage area and frantically searches among their gifts for a suitable weapon. When several aliens come to investigate the noise, he wishes Karate Kid was present to hold them off, and the Kid suddenly appears. Realizing what has happened, Brainiac 5 recovers the crate with the strange writing, and removes the machine inside it. He grasps the device and concentrates, and in a sudden burst of incredible force, the aliens are swept off Earth back to their own worlds, and the new Legion Headquarters complex is instantly completed.

Brainiac 5 tells his awestruck comrades that the device is a Miracle Machine, a device that converts thoughts into reality. He theorizes that it originated in the Controllers' universe, and this is confirmed when a Controller materializes before them, and warns of its vast potential for disaster. Heeding that warning, the Legionnaires seal the Miracle Machine in a cube of inertron until mankind is wise enough to use it.

Retrieved from "https://heykidscomics.fandom.com/wiki/Adventure_Comics_Vol_1_367?oldid=1399498"
Community content is available under CC-BY-SA unless otherwise noted.