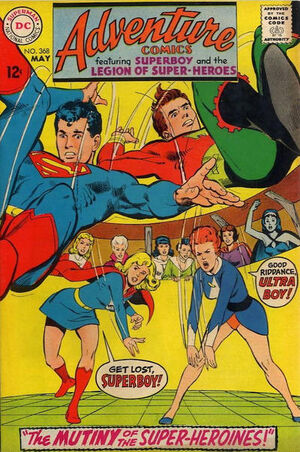 Appearing in "The Mutiny of the Super-Heroines!"Edit

Synopsis for "The Mutiny of the Super-Heroines!"Edit

After Karate Kid and Superboy test Val's fighting skills, they and the other Legionnaires are summoned to Metropolis Spaceport to rescue a spaceship carrying an alien ambassador to Earth. Upon their arrival the ship crashlands in a ball of flame, but the ambassador, a woman from the planet Taltar named Thora, easily frees herself, and emerges unscathed. Her society is a matriarchal one, and she expresses a marked distaste of all males, but she cordially greets President Boltax of Earth.

Later, Thora researches Legion lore, and carves miniature statues of the female Legionnaires, then touches a stud on her bracelet and causes an eerie radiation to bathe the statuettes. The result shows itself the following morning, when the Legion girls wake to find that their powers have been increased fantastically. Supergirl is now immune to Kryptonite, and she rescues her cousin Superboy from a Green Kryptonite trap. The boys, suspecting that the girls' increased powers may be the result of a rare space disease, quarantine them, while Thora continues to treat the statuettes with radiation at various intervals.

When the boys are trapped by inmates while attempting to quell a riot at the Prison Citadel on Mt. Metro, the girls break quarantine to save them. However, the boys chastise them for doing so, and the girls respond by angrily battling and defeating them. Now the bruised and battered male Legionnaires realize that a person, and not a disease, is behind the heroines' physical and mental change. Thora gloats over her division of the Legion, and visits the girls at headquarters.

As the division between the boys and the girls grows wider, Shadow Lass makes a remark about Brainiac 5 that shocks Supergirl, who remembers their romance. Thora keeps bathing the statuettes in radiation, and when the time seems right, she has the girls attack the boys and nearly kill them. Suddenly, her bracelet explodes, and the girls return to normal. Supergirl explains that Shadow Lass's remark had enabled her to escape Thora's control. Discovering her scheme, she learned how Thora controlled their minds and arranged for the bracelet to self-destruct. Thora then swallows poison as the penalty for her failure, not knowing that her own world had overthrown its matriarchal government while she was away.

Retrieved from "https://heykidscomics.fandom.com/wiki/Adventure_Comics_Vol_1_368?oldid=1399499"
Community content is available under CC-BY-SA unless otherwise noted.