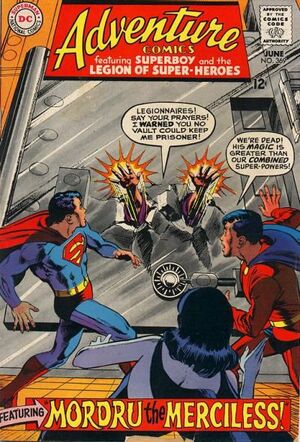 Four Legionnaires on duty at their headquarters, Superboy, Mon-El, Shadow Lass, and Duo Damsel, hastily use their Time Cube to escape to 20th century Smallville, as Mordru, the Dark Lord, pursues them. As a new Legionnaire, Shadow Lass had been exploring the sub-basement in which Mordru was imprisoned in a vault, and tried to open it. Mon-El spied her, warned her to stop, and told her Mordru's story.

The villain hailed from Zerox, the Sorcerers' Planet, and after mastering the ultimate mystic powers, made himself master of that world and conquered his sector of the galaxy. Saturn Girl was Legion leader at the time, and when Mordru attacked Earth, the team's battle with him seemed futile, until she directed Superboy and Mon-El to imprison him in an airless steel block, thus depriving him of his powers. He fell into a coma, and has remained in that state since.

However, Shadow Lass's tampering has caused air to seep into the block and revive him. Now forced to flee, the four Legionnaires quickly realize that Mordru will soon find them, and decide to adopt secret identities in hopes of eluding him. With the assistance of Superboy's foster parents, Jonathan and Martha Kent, Mon-El resumes the guise of Bob Cobb, the identity he had used when he first met Superboy. Duo Damsel becomes Marie Elkins, a supposed second cousin of Smallville Police Chief Parker's wife Leah, with whom she stays, and Shadow Lass dons white makeup to cover her blue skin, and becomes Betsy Norcross, an exchange student who resides with Lana Lang's family.

Mordru arrives, and causes a deep shadow to penetrate the town to find the missing Legionnaires. In doing this he puts Lana under his control and sees everything she does. As the days pass, the heroes stay as hidden as possible, and try to come up with a plan, while Mordru does his best to flush them out.

Then, a week after their arrival, "King" Carter and his gangsters come to Smallville and take it over. Because of Mordru, the young heroes fear to use their powers to stop them. Instead, with Jonathan Kent leading, the townspeople are convinced to stand against the mob and fight back. The crooks are overcome, and this gives the Legionnaires the moral resolve to do the same with Mordru. As they resume their costumes and gather in an alley behind the Kent home, Lana spies them from her window. Mordru now finds them, and suddenly materializes before the heroes.

Smallville's Police Chief Parker's first name is revealed as Douglas in this issue.

Retrieved from "https://heykidscomics.fandom.com/wiki/Adventure_Comics_Vol_1_369?oldid=1399500"
Community content is available under CC-BY-SA unless otherwise noted.