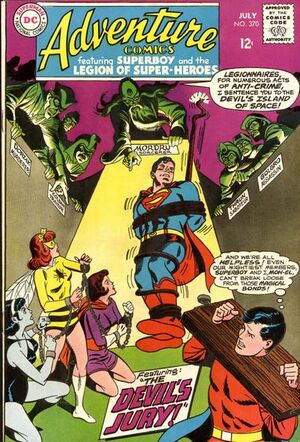 Appearing in "The Devil's Jury!"Edit

Synopsis for "The Devil's Jury!"Edit

Mordru easily crushes the four Legionnaires with his magic, but they escape by burrowing underground. Rushing back to the Kent home, Superboy swiftly constructs a hypnosis machine to erase their and the Kents' memories for an hour, so that Mordru cannot trace their thoughts. As they resume their earlier civilian guises, Mordru searches the minds of the Smallville populace in vain, but his probing causes the hypnosis to continue past its one-hour limit.

The villain then summons his armies to ferret out the Legionnaires, and causes Smallville to rise into space in order to limit their search. Pete Ross wonders why Superboy doesn't stop the armies and realizes that the Boy of Steel has forgotten who he is. He summons Lana Lang to a deserted house and confides the secret that Superboy is Clark Kent. With Lana as Insect Queen, they kidnap Clark and restore his memory. Superboy then does the same for his Legion comrades, and they make plans to stop Mordru and his army. The next day, the Legionnaires show themselves in battle against the invaders, but are easily defeated and taken to Mordru's cave headquarters outside town. Actually, Pete is disguised as Superboy, and Duo Damsel has portrayed both herself and Shadow Lass. The real Superboy, Shadow Lass, and Insect Queen are safe, and as the captive heroes are brought before Mordru, their allies come to rescue them. Stunned, Mordru is initially overwhelmed but easily recovers.

After defeating the heroes again, he holds a mock trial before a jury of 30th century criminals with his lackey, Wraithor, as prosecutor. Pete is defense attorney, and he attempts to shock the criminals into siding with him, but fails. Then Mordru, at Wraithor's suggestion, sentences all six youths to slow death inside a lead-lined, Kryptonite-coated vault. The heroes soon find that the vault is a fake, and after they break out, Wraithor appears and tells them that Pete's speech broke Mordru's spell over him. As he helps them to freedom, Mordru disintegrates him, and imprisons the heroes in a force-field, then creates a fireball and lifts it over his head, intending to hurl it down on them. This causes the cavern walls to crumble and collapse about him, sealing him under-ground, seemingly forever.

The Legionnaires return to Smallville, and Superboy uses his hypnosis ray to erase Lana's knowledge of his secret identity, but Mon-El prevents him from doing the same to Pete, instead causing him to forget that Pete knows his secret, because Pete is destined someday to use that information to save Superman's life. When the four Legionnaires return to Legion Headquarters, Invisible Kid explains that Mordru's attempt to destroy them failed, because Dream Girl foresaw his attack and summoned her sister, the White Witch, to protect them with her magic, while Princess Projectra cast an illusion to make him think that he had succeeded.

Retrieved from "https://heykidscomics.fandom.com/wiki/Adventure_Comics_Vol_1_370?oldid=1399501"
Community content is available under CC-BY-SA unless otherwise noted.