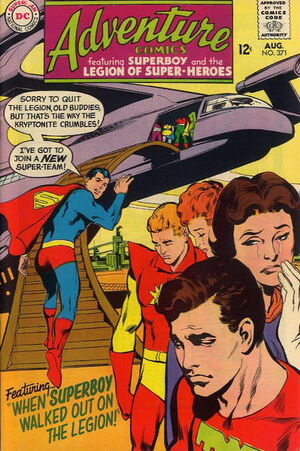 Appearing in "The Colossal Failure!"Edit

Synopsis for "The Colossal Failure!"Edit

Colossal Boy is spending a quiet evening at home with his parents when two men claiming to represent Universe TV call on the Allons to interview them as part of a documentary on the Legion. When the men set up their equipment, however, it gives off rays that turn Mr. and Mrs. Allon to glass. They then explain that their criminal superiors have assigned them to learn the exact details of the Legion training and testing program. Since such knowledge is classified and known only to members of the selection board, the men give Gim two weeks to uncover the information, and teleport away with his parents as hostages. Afraid to tell his comrades of his problem, Gim deliberately fails on a mission and submits to retraining in order to gain the needed information. Bouncing Boy, temporarily acting as instructor at the Legion Academy, suspects something wrong and, hoping to find clues to Gim's problem in the Allons' apartment, discovers a top-secret manual and illegal notes on the Legion training procedures.

Colossal Boy is charged with treason and spying and, still fearful for his parents' safety, he offers no defense at his trial. Ultra Boy, as the new Legion leader, then expels him from the Legion, and crushed, he leaves in disgrace.

Appearing in "When Superboy Walked Out on the Legion!"Edit

Synopsis for "When Superboy Walked Out on the Legion!"Edit

Retrieved from "https://heykidscomics.fandom.com/wiki/Adventure_Comics_Vol_1_371?oldid=1681365"
Community content is available under CC-BY-SA unless otherwise noted.