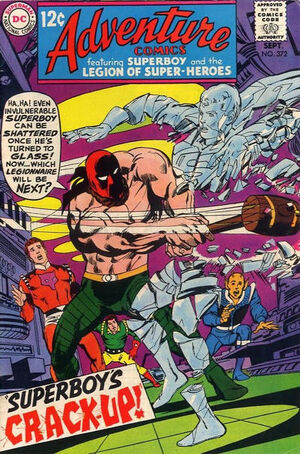 Appearing in "School for Super-Villains!"Edit

Synopsis for "School for Super-Villains!"Edit

The two crooks who had forced Colossal Boy to betray his comrades meet him with a new proposition, even as Bouncing Boy and Ultra Boy visit the Allon apartment in hope of questioning Gim's parents and discover that the Allons had mysteriously vanished a week earlier.

Back at Legion Headquarters, Brainiac 5 examines Mrs. Allon's life-jewel, a gem linked with its owner's life-force. Shrinking Violet reduces to atomic size and travels through the infra-energy beam connecting the jewel to Mrs. Allon, and is thus transported to a strange distant planet. There she finds an exact duplicate of the Legion training center, which is being used to instruct future members of a Legion of Super-Villains. Colossal Boy, who remembers much of the data he stole, is present as a teacher. Tarik the Mute, a man who turned criminal when a police blaster accidentally hit his throat, ruining his voice, and who now communicates by beaming his thoughts to a telepathic android which speaks for him, is the organizer of the evil Legion counterpart.

Violet reports to the Legionnaires, who now realize that Colossal Boy had betrayed them only because the criminals are holding his parents. They decide to infiltrate the villains' school to help him, and Super-boy, Chameleon Boy, and two Legion Academy trainees, Chemical King and Timber Wolf, are chosen for the job. They disguise themselves as students who failed Legion training and create a staged disturbance in order to get themselves noticed. A man representing Tarik sees them, offers them sanctuary, and takes them to the Super-Villain school.

Touring the complex, the four disguised heroes note familiar faces belonging to such Legion traitors and rejectees as Nemesis Kid, Spider Girl, Radiation Roy, and Lightning Lad's brother Mekt, now the villainous Lightning Lord. Colossal Boy recognizes the four before they have a chance to confer with him, however, and exposes their true identities. In the battle that follows, the heroes are captured and condemned to be turned into glass and shattered.

The next morning, the four are brought to the death-room to be executed before the entire student body. When Superboy is seemingly turned to glass and smashed, Colossal Boy goes berserk. In the ensuing melee, the surviving heroes summon the other Legionnaires and together they break up the villain school. Superboy knocks out Tarik when the villain attempts to destroy Mr. and Mrs. Allon in revenge.

The Boy of Steel had actually exchanged identities with Chameleon Boy, who had used his power to become glass, thus making it seem that Superboy had been destroyed. The Allons are returned to normal, Colossal Boy is restored to full Legion membership, and Chemical King and Timber Wolf earn their Legion Academy diplomas and join the team.

Retrieved from "https://heykidscomics.fandom.com/wiki/Adventure_Comics_Vol_1_372?oldid=1399503"
Community content is available under CC-BY-SA unless otherwise noted.