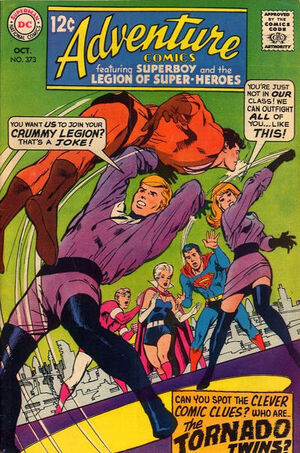 Appearing in "The Tornado Twins!"Edit

Synopsis for "The Tornado Twins!"Edit

An alarm summons the Legionnaires to the United Planets Vehicle Research Center, where crooks are stealing the vehicles stored there. When the super-heroes arrive, they find the crooks already bound and captured by two youths who introduce themselves as Don and Dawn Allen. Karate Kid tries to question them to no avail, and the two depart. Later, the Legion answers an emergency summons at the Alpha Iron Mine, where people are trapped underground in a cave-in caused by malfunctioning robot workers. During their rescue attempt, several Legionnaires are overcome by the robots, and a second cave-in cuts Superboy off from his comrades. Because a Green Kryptonite meteor thwarts his attempt to dig them free, he rushes to the surface to get help. Don and Dawn Allen suddenly appear and use their abilities to vibrate through the fallen earth. Dawn causes the robots to smash against the cave wall with a wave of her hand. The rescue gets full coverage by the press. The Legionnaires, suspicious, do some investigating, but fail to uncover any incriminating information on the Allens. When Don and Dawn reappear to save the day at a third emergency, a fire at a chemical plant, the Legion members watch them in action, then offer them membership, which the Allens refuse. An irritated Karate Kid starts a fight with Don Allen in which the others are quickly involved, but they are defeated by Don and Dawn. When next an alarm comes in, the Legionnaires' morale is so low that they leave it unanswered, assurning that Don and Dawn will take care of it. After some moments, however, they investigate and fly to Central Square where they find a gigantic alien space-ship. Smashing it open, they find it to be a dummy, hiding a huge statue of the Flash. Don and Dawn appear, wearing replicas of the Kid Flash costume, and explain that they are direct descendants of Barry Allen. Because the day has been designated Flash Day by the United Planets, Don and Dawn publicized the event by having Barry Allen's super-speed power temporarily recreated in themselves. All is explained, and all is forgiven on both sides.

Retrieved from "https://heykidscomics.fandom.com/wiki/Adventure_Comics_Vol_1_373?oldid=1399504"
Community content is available under CC-BY-SA unless otherwise noted.