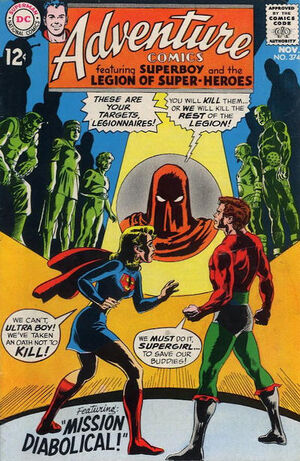 Various teams of Legionnaires are overpowered and taken captive at different locations, leaving only five members, Ultra Boy, Element Lad, Dream Girl, Super-girl, and Matter-Eater Lad, at headquarters. A mysterious masked figure suddenly appears on their communicator and tells the five heroes that the notorious space gang, Scorpius, holds their comrades hostage. Teleporting them to a hidden headquarters, he informs them that they must defeat a group of criminals who are part of a rival organization called Taurus. These include Rogarth, who possesses super-strength, Black Mace, who wields the weapon for which he is named, Mystelor, a woman with telepathic and telekinetic powers, Shagrek, an alien able to disintegrate anything with beams from his antennae, and Quantro, a member of a self-professed "superior" race able to change into a beam of light.

Forced to obey, the Legionnaires disguise themselves and assist a Scorpius squad in battle with the Taurus gang at the Brande Industrial Complex in Metropolis. When the Substitute Heroes and the Science Police arrive, the Legionnaires and the gang members flee. Police Chief Zoltorus ignores the Taurus gang to concentrate on the Scorpius gang, and the Substitutes recognize the departing Legionnaires. Later, Zoltorus visits Leland McCauley, the second richest man in the universe, to accuse him of being the brains behind Scorpius, and of attacking R. J. Brande out of jealousy. Meanwhile, Ultra Boy and his fellow Legionnaires try to discover the identity of Taurus' leader. Dream Girl predicts where the Taurus gang will next strike, and Ultra Boy makes plans to impersonate Black Mace and to switch places with him. The heroes follow Dream Girl's prediction and show up in a casino on the asteroid, Ceres, but in the ensuing struggle, Ultra Boy is knocked out. Dream Girl decides to follow through with his scheme and, after rendering Mystelor unconcious, takes her place within the Taurus gang. Once inside their ship, Dream Girl, as Mystelor, persuades the gang to meet their leader to demand more pay for their services.

Secretly tracked by the Legionnaires, the Taurus gang meets with their boss, and to the heroes' astonishment, he is none other than R. J. Brande, their benefactor. After capturing him in the battle that follows, however, they unmask him as a disguised Chief Zoltorus, who had kidnapped Brande and used his money to build a crime empire. When Quantro learns of the fake Mystelor, he vows to her that he will try to reform his fellow criminals. The heroes are then transported back to Scorpius headquarters, where they are reunited with their captive comrades. When Scorpius is about to kill them all rather than let them go free, however, the Substitute Legion arrives to save them. Scorpius is captured, and the two Legions compare notes on the case.

Retrieved from "https://heykidscomics.fandom.com/wiki/Adventure_Comics_Vol_1_374?oldid=1399505"
Community content is available under CC-BY-SA unless otherwise noted.