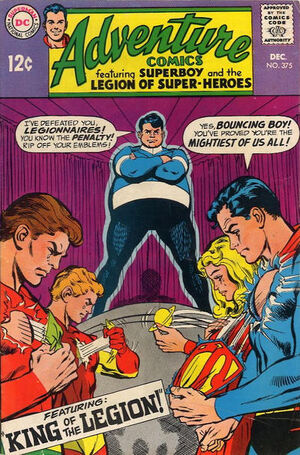 Appearing in "The King of the Legion!"Edit

Synopsis for "The King of the Legion!"Edit

On the barren Asteroid 108, two heroic teams, the Legion of Super-Heroes and the Wanderers, meet in peace and vow eternal friendship. The Wanderers, who operate in a remote section of the universe, include Celebrand, leader of the group, Psyche, mistress of emotions, Elvo, the swordsman, Immorto, who has a force within him that allows him to live again after being "killed", Quantum Queen, who can become any type of quantum radiation, Omitho, who can take the form of any bird, and Dartalg, who wields an array of special darts. Departing, the wandering heroes prepare to return home, but accidentally fly their ship through a glowing space cloud, whose radiations temporarily turn them evil.

Later, at Legion Headquarters, a gigantic gauntlet abruptly materializes and engraves a message on a supposedly indestructible armor plate, challenging the mightiest Legionnaire to combat. As the Legionnaires debate as to which of them should respond to this summons, word comes from the new Science Police commander, Chief Ianos, about the Wanderers. He informs them that the former crusaders have stolen the seven stones of Alactos. The Legionnaires decide to make hunting the Wanderers a contest to find the mightiest Legionnaire. In competition are Brainiac 5, Timber Wolf, Chemical King, Karate Kid, Chameleon Boy, Sun Boy, Superboy, Mon-El, Element Lad, Saturn Girl, Ultra Boy, and Bouncing Boy.

In the final contest, Superboy and Bouncing Boy face Celebrand, who possesses the stolen seven stones, which enable him to see into time and through dimensions, and reveal the approaching heroes. He purposely surrenders to Bouncing Boy, who is thus declared the winner of the contest.

During a ceremony in which his comrades acknowledge Bouncing Boy victor, a ray teleports him away. Just then, the real Bouncing Boy arrives, leaving the Legionnaires wondering who the impostor was.

Retrieved from "https://heykidscomics.fandom.com/wiki/Adventure_Comics_Vol_1_375?oldid=1399506"
Community content is available under CC-BY-SA unless otherwise noted.