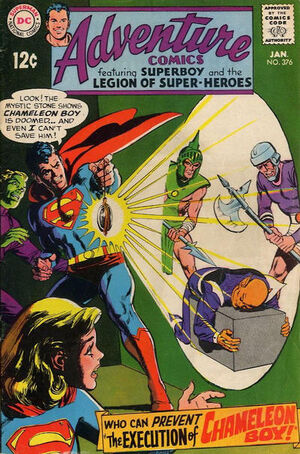 Appearing in "The Execution of Chameleon Boy!"Edit

Synopsis for "The Execution of Chameleon Boy!"Edit

The ersatz Bouncing Boy finds himself in an extradimensional world not unlike that of King Arthur and his Knights of the Round Table, whose people use modern technological implements which nonetheless resemble ancient devices. He learns that Kodar the Black Vassal, a powerful baron, seeks the hand of the kingdom's Princess Elwinda, daughter of King Artros, and then the kingdom itself. Since none of Artros's men dare to face him, a challenge was issued to the Legion of Super-Heroes' mightiest member. If the Legionnaire defeats Kodar, he will win the princess's hand. When instruments indicate that Bouncing Boy is not what he seems, he is revealed as Chameleon Boy, who had disguised himself as Bouncing Boy, while his pet, Proty II, became a duplicate of his master. Since the real Bouncing Boy had been knocked unconscious during the battle, Chameleon Boy had decided to borrow Bouncing Boy's identity, hoping it would help him win the contest.

Touring the kingdom in the form of a bird, Chameleon Boy sees Princess Elwinda in a walled garden and flies to her. Although initially afraid of his powers and alien appearance, she soon accepts him for what he is, and the two grow close. When the Legionnaire is summoned before Artros and his council, however, he is informed that he will not be allowed to fight Kodar because he might win, and an alien cannot be permitted to claim Elwinda. When he rebels, they imprison him, and Elwinda fruitlessly pleads his case. Some days later, Kodar and his forces attack. Artros and his men fall before him, but Chameleon Boy's cell is blasted open during the course of the battle. Chameleon Boy then defeats Kodar and is honored by a grateful Artros. He asks to marry Elwinda, and a ceremony is performed on the battlefield in which the couple takes vows under raised axes.

Meanwhile, the Legionnaires have realized that Chameleon Boy is missing, and are using the seven stones of Alactos to search the dimensions for him. When they suddenly find him, they suppose that he is about to be executed, and so use a teleport ray to bring him back to Earth, permanently sealing the dimensional passage between the two worlds in the process.