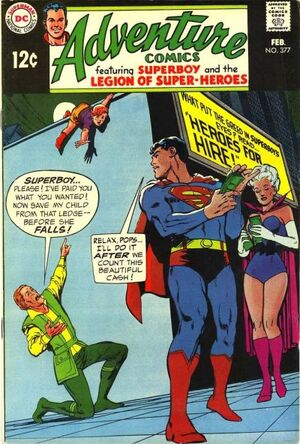 Appearing in "Heroes for Hire!"Edit

Synopsis for "Heroes for Hire!"Edit

Captured by the Legion and the Science Police, criminal Alk Ranff tells them that his gang operates from the planet Modo, a world controlled by Modulus, a being who is part of Modo itself. Modo has become a safe haven for criminals of many planets, and because Kryptonite and hostages are kept there, the Legion is helpless to interfere.

Returning to their headquarters to think things through, they finally announce that the situation seems hopeless and that their own welfare is more important. Their meaning soon becomes clear, as Superboy answers an alarm to save an air transport ship from crashing into the Indian Ocean, but only after one passenger, millionaire Leland McCauley III, pays him for doing so. Similarly, Karate Kid saves the irreplaceable rare book collection of the Carey Interplanetary Library, after demanding a reward of five million dollars. An indignant Leland McCauley contacts the Legion and demands that they make an appearance on the "Meet the Press" program to explain their behavior. On worldwide TV, the heroes explain that they are helpless before the current crime wave, and have decided to earn money with their deeds, no matter how the public reacts. In the days that follow, the crime wave increases, and the public turns against the Legion.

The heroes depart Earth and use a Legion Cruiser as their base, while accepting jobs on different worlds. On the planet Gnogg, Superboy saves a little girl and is paid in ergloks, a currency made of pure radium. Princess Projectra creates an advertising image on the planet Rojun and is paid with its money, living crystals. Karate Kid earns gaseous money by fighting a boxing champ on Mercury. All sorts of weird alien monies are earned by the mercenary Legionnaires, and when Brainiac 5 gives the word, they go on a mad spending spree.

Meanwhile, criminals attack the Legion ship and take it to Modo, hoping to acquire its wealth. The Legionnaires escape, and Brainiac 5 has Chemical King use his power on the stored cash to set in motion a process whereby the alien monies react with each other to create a radiation that paralyzes everyone on Modo, including Modulus. The Science Police then go to the planet and make a mass arrest. Their scheme successfully completed, the Legionnaires return all the money they were paid, with interest.

Retrieved from "https://heykidscomics.fandom.com/wiki/Adventure_Comics_Vol_1_377?oldid=1399508"
Community content is available under CC-BY-SA unless otherwise noted.