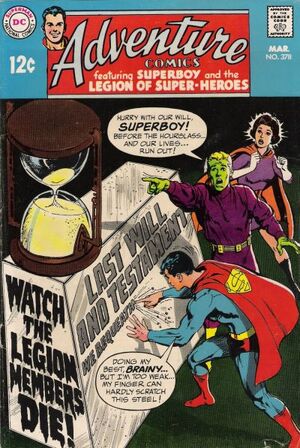 Appearing in "Twelve Hours to Live!"Edit

Synopsis for "Twelve Hours to Live!"Edit

Brainiac 5 celebrates his birthday with four of his comrades, Superboy, Duo Damsel, Karate Kid, and Princess Projectra. They toast him with kono juice in ivory cups as is the custom on his world, but as he drinks, he notes an unusual bitter taste. Rushing to his lab, he finds that an unknown enemy has laced all the cups with deadly Rakurga poison, for which there is no known antidote. Even Superboy will be affected, as his cup was laced with added Kryptionite. Brainiac 5 announces to the others that they now have twelve hours to live, and as they walk away to live out those hours, he dedicates himself to finding a cure in time.

Superboy goes back to 20th century Smallville and walks through the town, but finds the memories that well up within him too much to bear, and so returns to the 30th century to dedicate himself to performing as many good deeds as he is able. Watching the Boy of Steel on a monitor, Duo Damsel wishes she could do as he is doing, and goes to spend her final hours with her parents in their suburban home, without telling them of her plight. Karate Kid decides to die in battle. Tapping into the Science Police crime-computer, he learns the probable whereabouts of the Fatal Five and uses an experimental Legion warp-ship to fly there and attack them. He nearly overcomes the villains, until Tharok realizes that he is alone and orders Validus to blast him. The gargantuan being does so, ripping a hole in the Five's asteroid base in the process.

The Fatal Five escape in a ship after Tharok activates a destruct mechanism which nearly destroys Karate Kid, who is disappointed to have survived the encounter. As for Princess Projectra, she feels alone without Karate Kid or her parents near. A senso-theater movie fails to shake her depression, and she walks to Metro Square Park. There, a young man named Myron Marks notes her glumness and helps her face impending death calmly and with courage. The five doomed Legionnaires gather in their headquarters, where they learn that Brainiac 5 has failed to find a cure. They make a will, bequeathing their possessions to their surviving comrades.

After they sign the document, a huge steel tablet, the poison begins to take effect, and they collapse one by one. At the last moment, Brainiac 5 realizes that the Miracle Machine can save them, and he rushes to it, only to find it still sealed in inertron. He too sinks into a coma, and as the heroes' lives ebb away, a mysterious figure suddenly appears before them, gloating over their deaths. Suddenly, he freezes, for time inside the Legion Headquarters has now completely stopped.

Retrieved from "https://heykidscomics.fandom.com/wiki/Adventure_Comics_Vol_1_378?oldid=1399509"
Community content is available under CC-BY-SA unless otherwise noted.