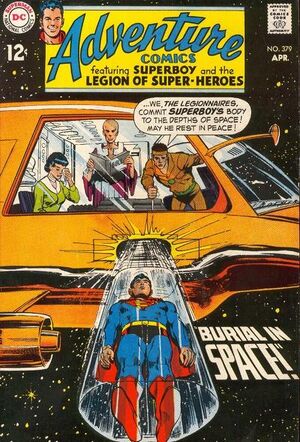 Appearing in "Burial in Space"Edit

Synopsis for "Burial in Space"Edit

The alien who has stopped time in Legion Headquarters had come to obtain aid for his race, the Seerons. When other Legionnaires arrive at their base, he explains their comrades' poisoning and promises to provide a cure if the Legion will successfully perform a task for him.

With little choice, the heroes agree, and find themselves teleported to the alien's homeworld, Seeris. There the Legionnaires learn that the Seerons have devoted themselves to thought and ideas. Complete automation occurred long ago, and machines perform all necessary physical tasks. Their entire system is now being threatened by a neighboring army whose physical might renders them impervious to the Seerons' mental prowess. The Legion members engage in two skirmishes with the invaders, but fail to turn them back. Meanwhile, back at headquarters, Invisible Kid and Shrinking Violet return from a mission, find their supposedly deceased fellow members, and commit their bodies to space in a funeral ceremony. In Seeris City, Ultra Boy addresses the entire populace, telling them that they outnumber the invaders 10,000 to 1, and that they can win by sheer numbers. The Seerons then attack the invaders and overcome them just as he had suggested.

In gratitude, the Seerons return the Legionnaires to their headquarters, lifting the spell of timelessness and curing all within of every infirmity. The Legionnaires arrive to greet Invisible Kid and Shrinking Violet, who inform them of the funeral, they have given the supposedly deceased heroes. Ultra Boy hastily uses the Miracle Machine to restore the five heroes to health, and a small-time crook, Alek Korlo, is revealed as the one responsible for the poisoning.

Retrieved from "https://heykidscomics.fandom.com/wiki/Adventure_Comics_Vol_1_379?oldid=1399510"
Community content is available under CC-BY-SA unless otherwise noted.