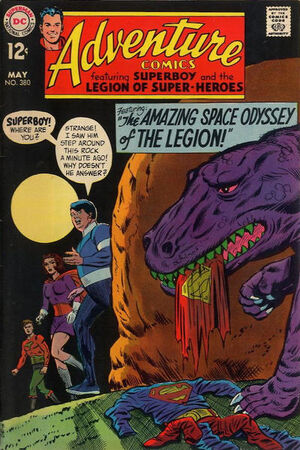 Appearing in "The Legion's Space Odyssey"Edit

Synopsis for "The Legion's Space Odyssey"Edit

As Superboy and Invisible Kid inspect equipment in the master communications room, Dream Girl contacts Superboy by monitor to confide to him a prediction she has had. Moments later, Invisible Kid notes a tremendous energy building up within the headquarters complex, and collects all Legionnaires present to evacuate. As they gather, an explosion occurs, and the heroes find themselves apparently teleported to a strange world in a remote, uncharted section of the galaxy. There they are attacked by a monstrous creature with teeth made of Green Kryptonite, which appears to devour Superboy.

The grieving Legionnaires erect a memorial to the Boy of Steel, then set about the task of surviving on the planet until they can leave. Using their powers and scientific knowledge, they build a spaceship. When the craft is damaged by a meteor, Ultra Boy guides it to the nearest planet. While repairing their ship, the Legionnaires are beset by realistic illusions. Later, when a storm threatens to overcome them, a mysterious whirlpool forms around them and saves them. The ship is eventually repaired, and Ultra Boy enables the craft to break the dimensional barrier and return to Earth.

When the heroes radio for permission to land, however, the Science Police accuse them of being phonies. Puzzled, Ultra Boy uses his penetra-vision to see robot duplicates of themselves, together with Superboy and Mon-El, at Legion Headquarters. A fantastic ray-blast then destroys the robots, after which the Legionnaires are given permission to land.

Superboy reveals that he has engineered all that has happened to the Legionnaires, with the assistance of the Legion of Super-Pets, because of Dream Girl's prediction that they would be "threatened by an evil old man in a sailboat, who would turn the wind against them." Meanwhile, the old man, Skyzznx, and his young female partner, Alrrk, are hiding in their vessel on the surface of the sun, and gloating over eliminating the Legion with their death ray, a weapon which taps the power of the solar wind. These would-be conquerors of Earth are soon tracked down by the Legion, and Skyzznx pays for his failure by turning the death ray on himself and Alrrk.

Inspired by Homer's "The Odyssey".

Retrieved from "https://heykidscomics.fandom.com/wiki/Adventure_Comics_Vol_1_380?oldid=1399514"
Community content is available under CC-BY-SA unless otherwise noted.