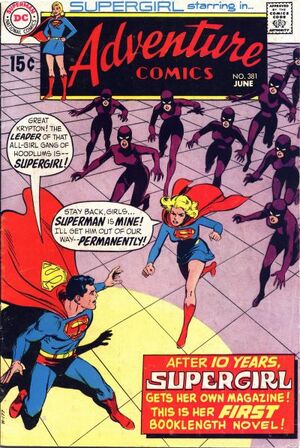 It's all right. I know what I'm doing! Supergirl

Appearing in "The Supergirl Gang"Edit

Synopsis for "The Supergirl Gang"Edit

Patroling Metropolis while Superman is away on a Justice League mission, Supergirl stumbles upon a group of female cat burglars robbing a penthouse. In stopping the thieves, she learns that one of them is Judy Benson -- a college classmate in her civilian guise of Linda Danvers. Wanting to find out what's going on, Supergirl picks up Judy from the Metropolis police station in her Linda Danvers guise and finds out that Jdy has joined up with an all girls sleuth school and has a hard time recalling the events of that led to her arrest.

Finding everything all too suspicious, Supergirl decides to investigate the Sleuth School but finds that her x-ray vision is useless because it's been treated to prevent snooping by her cousin. She then decides to infultrate the school in her civilian guise and joins for membership. Joining up with her classmates she finds the founder Jonathan Maxom very suspicious however, she finds reason to doubt her suspisions.

However, to turns out that Maxom has been using a special costume to brainwash the girls in his sleuth school in order to rob for him. this plot is finally foiled by Supergirl with the help of Batgirl who was also posing as a student in the school, and after they knock out Maxom, Batgirl reveals that she had secretly recorded him boasting about his plans to use girls to rob for him.

Retrieved from "https://heykidscomics.fandom.com/wiki/Adventure_Comics_Vol_1_381?oldid=1503930"
Community content is available under CC-BY-SA unless otherwise noted.