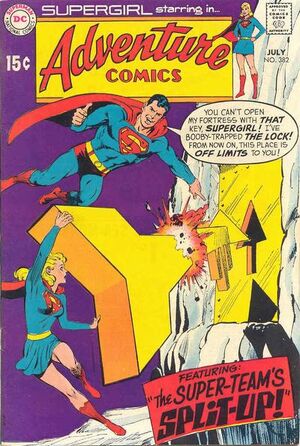 Jor-El's robot teacher from Krypton, which originally tested Superboy and found him worthy of being a super-hero, now comes to Earth to test Supergirl, believing her emotionally incapable of properly using her powers. (At the time, Supergirl is on the outs with Superman for messing up during a fight with the villain Vulinac.) Disguising itself with a light-cloak and calling itself "Topar", the robot-teacher takes control of Supergirl's Linda Danvers and Supergirl robots, makes them malfunction to put her under more strain, and threatens to take away her powers. But, with the help of a campus vandal called the Red Rebel, Supergirl traps and reveals the robot-teacher, who admits she has passed the test. Later, Superman apologizes for "being so miffed" with Supergirl.

Retrieved from "https://heykidscomics.fandom.com/wiki/Adventure_Comics_Vol_1_382?oldid=1399513"
Community content is available under CC-BY-SA unless otherwise noted.