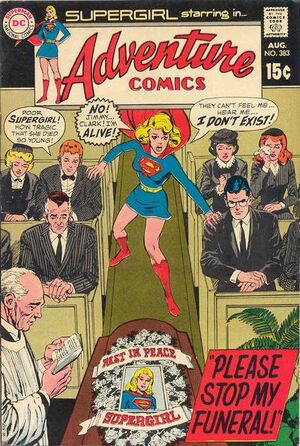 Clark! I'm right here beside you! I'm not dead! If this is a joke, I don't appreciate it! Do you hear me?

Appearing in "Please Stop My Funeral!"Edit

Synopsis for "Please Stop My Funeral!"Edit

Supergirl destroys an unmanned UFO which tries to snatch the Apollo 15 space capsule. The UFO explodes and, unbeknownst to her, throws her into a "negative Earth" populated by negative duplicates of humans on Earth-One. "And when a person dies on our Earth, his negative double on their world becomes a normal, positive being...unseen by the negative people and mourned by them as dead!" On the negative Earth, Supergirl attends her own funeral and then encounters Abraham Lincoln, Sir Isaac Newton, and Joan of Arc, before a skyrocket's explosion throws her back into her own world.

Appearing in "Supergirl's Day of Danger!"Edit

Synopsis for "Supergirl's Day of Danger!"Edit

Two scientists undertake an experiment with Supergirl, hoping to transfer her invulnerability to student and wrestler Tony Walston for 24 hours. They make Tony invulnerable, but whatever blow is directed at him is felt by Supergirl, through a psychic link. When gambler Vince Martell tries to work Tony over to make him throw a match with Metropolis athletes, Supergirl is almost incapacitated. She recovers and uses her powers to help Tony escape Martell's clutches, then has her invulnerability restored to her own body.

Retrieved from "https://heykidscomics.fandom.com/wiki/Adventure_Comics_Vol_1_383?oldid=1503922"
Community content is available under CC-BY-SA unless otherwise noted.