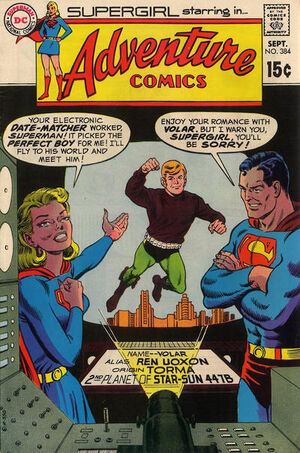 Appearing in "The Heroine Haters!"Edit

Synopsis for "The Heroine Haters!"Edit

After seeing her roommates at Stanhope College get computer dates, Linda Danvers becomes Supergirl and uses a computer at the Fortress of Solitude to find a "perfect match" for her. The computer picks a super-being named Volar, who fights crime on the planet Torma. Superman warns Supergirl that even his computer is not infallible, but she goes to Torma to meet Volar anyway. Supergirl becomes a friend of Volar, but no romantic interest is felt. She learns that, on Volar, women are considered totally inferior thanks to the teachings of The Visitor, a philosopher who preached against women after he was jilted by a girl on his homeworld. Finally, Supergirl learns that Volar is actually a super-heroine masquerading as a male to avoid Torma's sexual discrimination. In anguish, she leaves. But Volar, encouraged by Supergirl's example, begins operating openly as a super-heroine, and vows to shatter Torman prejudices against women.

Linda Danvers takes a summer job as a counselor at Camp Nokomis. While there, she discovers telltale signs that someone knows her secret identity--and is trying to expose it. Eventually Supergirl learns that she has been exposed to Kryptonite#Red Kryptonite, and its temporary effect has been to give her a split personality, with her conscious self trying to conceal her double identity and her unconscious self trying to reveal it.

Retrieved from "https://heykidscomics.fandom.com/wiki/Adventure_Comics_Vol_1_384?oldid=1399516"
Community content is available under CC-BY-SA unless otherwise noted.