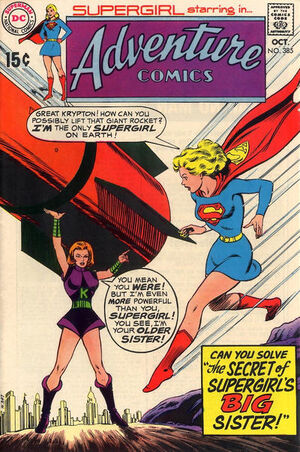 Carol Benton hatches a ruse to be used on Supergirl, to get her to create diamonds for her from lumps of coal. Disguising herself as "Kranna", appearing before Supergirl in a rocket actually created by her father, a scientist, and claiming to be her long-lost older sister from Krypton, Carol fakes super-powers with scientific tricks and, finally, gets Supergirl to squeeze coal into diamonds in a super-power "competition." Supergirl leaves momentarily, baiting Carol into revealing her true nature when the Girl of Steel is out of sight. After Carol laughs raucously, Supergirl comes back, melts the diamonds with her heat-vision, and tells Carol she gave away her non-super nature from the start: if she was really a Kryptonian, she would not have needed a rocket to fly to Earth.

Appearing in "The Jilting of Supergirl"Edit

Synopsis for "The Jilting of Supergirl"Edit

Raynor, the prince of a subterranean kingdom, comes to the surface world, romances Linda Danvers while disguised as a student, then reveals his true identity while telling her he knows her Supergirl identity. He also exhibits his super-powers, which are given to the royal family members of his inner-world by a "chalice nectar" which they drink. Supergirl accepts his offer of marriage and returns with him to the subterranean kingdom, which thrives under an artificial sun. However, the rays of the "sun" act like Kryptonite#Red Kryptonite on Supergirl, temporarily removing her powers. She is briefly kidnapped by terrorists in search of the chalice elixir, but is saved by Raynor. Raynor feels that she would be a hindrance rather than an asset to him, and, despite her protests that the power-loss is only temporary, breaks off the engagement and leaves a tearful Supergirl on the surface.

Retrieved from "https://heykidscomics.fandom.com/wiki/Adventure_Comics_Vol_1_385?oldid=1399517"
Community content is available under CC-BY-SA unless otherwise noted.