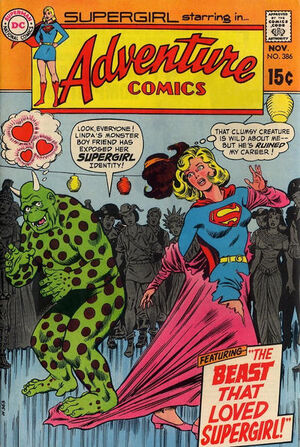 Appearing in "The Beast That Loved Supergirl!"Edit

Synopsis for "The Beast That Loved Supergirl!"Edit

Supergirl is plagued by the antics of a "mystery monster" with magical powers who appears to have fallen in love with her. The monster's attempts to show his affection result in

near-disaster, as when he rips up a section of railroad track to make a huge metal "ring" for her. Supergirl deduces the magical monster is Mr. Mxyzptlk in disguise. She takes him to the Fortress of Solitude, gets him to repeat his name backwards, and succeeds in banishing him to the 5th Dimension.

Appearing in "The Godmother of Steel!"Edit

Synopsis for "The Godmother of Steel!"Edit

When Linda Danvers detects sadness in the countenance of her friend and dance-act partner Cindy Frazer, who is a lookalike for her, she investigates and discovers that Cindy's foster mother is an overbearing bitch and her two stepsisters are chips off the old blockbuster. Supergirl takes Cindy to a dude ranch, where she meets Eric Prince and begins a romance with him. She substitutes for Cindy in her home, but can't resist giving the three bears their comeuppance when their bullying goes too far. In retaliation, Cindy's foster mother leaves town with her daughters, and orders "Cindy" (Linda) to leave. Supergirl thinks she's blown it, until she finds that Cindy and Eric are going to get married.

The Godmother of Steel is a take on the classic tale of "Cinderella", with Supergirl playing the fairy godmother!

Retrieved from "https://heykidscomics.fandom.com/wiki/Adventure_Comics_Vol_1_386?oldid=1399518"
Community content is available under CC-BY-SA unless otherwise noted.