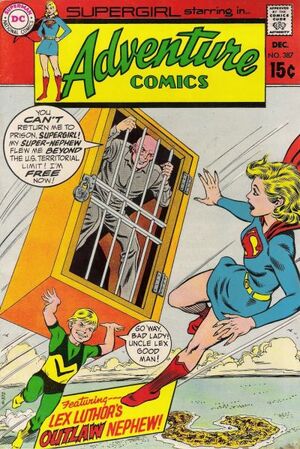 Dr. Sanford develops a serum that can make Supergirl immune to Kryptonite, but it also gives her a hairy wolf's face and hairy hands. Superman and Dr. Sanford try to find an antidote for the serum, but neither have any luck. Ironically, though, a Supergirl from a parallel universe where hairy wolf-faces are the norm for humans has taken a similar serum, which makes her into a smooth-faced freak. The barriers between their dimensions are opened by an explosion which occurs after Supergirl rescues astronauts from a faulty rocket. After they meet and compare notes, both Supergirls take serum developed by the Dr. Sanfords of each universe. The heroines' normal appearances are restored, and they return to their native dimensions, sealing the warp with their heat-vision.

Lex Luthor, out of jail again, goes to Midvale to covertly observe his sister Lena Thorul-Colby and discovers she has a young son, Val Colby, who has incredible psychokinetic powers. Luthor deduces that Val's powers came partly from inheritance from his mother, and partly from a space-jewel he sent as an anonymous birthday gift which was originally used to energize alien computers. When Val is almost hit by a car he had levitated, Luthor breaks cover, rescues him, and gains his trust. Luthor is jailed shortly afterward by Supergirl. When Val sees him on television, he levitates to the prison and breaks Luthor out. By the time Supergirl arrives, Val has levitated himself and Luthor outside the three-mile limit, and Luthor claims immunity from capture. He takes Val to a remote island where he has a secret laboratory, and makes plans to use the lad against Superman and Supergirl.

Retrieved from "https://heykidscomics.fandom.com/wiki/Adventure_Comics_Vol_1_387?oldid=1399519"
Community content is available under CC-BY-SA unless otherwise noted.