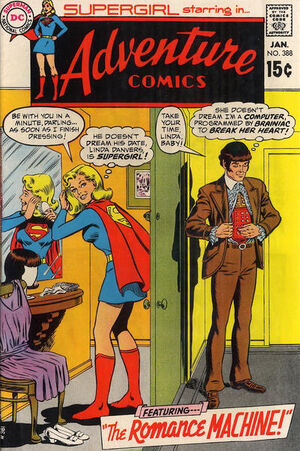 Appearing in "The Kindergarten Criminal"Edit

Synopsis for "The Kindergarten Criminal"Edit

Lex Luthor tries to train Val Colby to be his secret weapon against Superman, Supergirl, and the forces of law and order. He has Val levitate Kryptonite blocks around the island to demonstrate his power is not weakened by Green K exposure. Supergirl is, though, and she has come to Luthor's island to check things out. She disguises herself as Linda Danvers, appeals to Val, and gets on his good side. Though Luthor wants to toss Linda off the island, Val prevails. Linda treats Val in kindly ways while Luthor tries to corrupt him, and Linda wins out. Finally, a freak accident with an "imago-helmet" of Luthor's creation short-circuits Val's power, and Supergirl pushes Luthor's island within the legal boundaries of the United States of America. Captured, Luthor snarls at his nephew, saying that he is not really his uncle, deliberately lying to keep him away from a life of crime. Approving of Luthor's unselfish act, Supergirl flies Val back to Lena Thorul-Colby.

Appearing in "The Romance Machine"Edit

Synopsis for "The Romance Machine"Edit

Brainiac makes a robot in the image of heartbreaker and criminal Kimor Dann, programs it with Kimor Dann's personality, and then isolates the real Kimor Dann on a primitive planet. He sends the robot to Stanhope College, where, as "Kim O'Ryan", it romances Linda Danvers in an attempt to get at Supergirl. However, the robot's haughty and egotistically cruel ways repulse Linda, and he treats Supergirl the same way when she meets him. In spite of herself, Supergirl is still attracted to him, and flies after him, begging "Kim O'Ryan" not to leave.

Retrieved from "https://heykidscomics.fandom.com/wiki/Adventure_Comics_Vol_1_388?oldid=1399520"
Community content is available under CC-BY-SA unless otherwise noted.