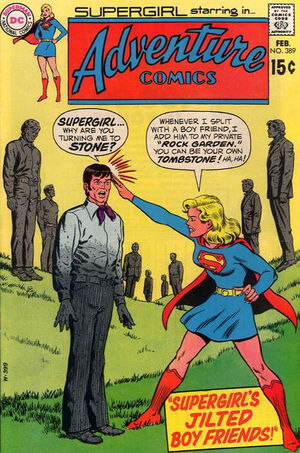 Appearing in "The Mystery Magician"Edit

Synopsis for "The Mystery Magician"Edit

Many fathers of the Stanhope College coeds show up for a special Father's Day ceremony, and Linda Danvers helps stage magician Malcolm the Mysterious regain the confidence he lost ten years ago with his wife's death by helping him perform magic tricks with her powers. Vera, suspecting Linda is Supergirl, makes her stay in a lead-lined windowless room while Malcolm finishes his act. To help out, Supergirl asks her father Zor-El, now tiny-sized and living in Kandor, to come and secretly aid Malcolm. With his unknown partner, Malcolm finishes his act successfully.

Brainiac orders the Kimor Dann robot to keep being abusive to Supergirl, planning to have the robot eventually pull a scene before the Girl of Steel and blow himself up. Since Supergirl, he thinks, will blame herself for "Kim O'Ryan's" "suicide", she will have to retire. But the real Kimor Dann has made his way to Earth and taken the robot's place, and Supergirl has learned of Brainiac's plot. When Brainiac, thwarted, tries to kill Supergirl with a Kryptonite spray, she has Kimor Dann throw her the explosive device the robot was to have destroyed itself with, and uses it to blow the Kryptonite off of her. Brainiac escapes, but Supergirl takes Kimor Dann to a reformatory.

Retrieved from "https://heykidscomics.fandom.com/wiki/Adventure_Comics_Vol_1_389?oldid=1399524"
Community content is available under CC-BY-SA unless otherwise noted.