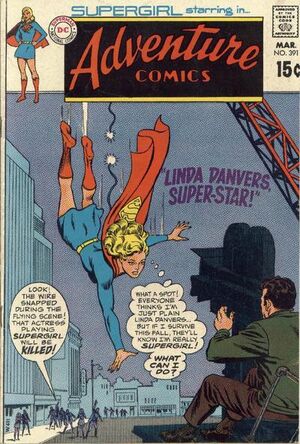 After a computer picks "actress" as a good career choice for both Linda Danvers and Eve Emerson, filmmaker John Harris tries them both for the title role in a movie he's making about Supergirl. Linda gets the part, much to Eve's and her boyfriend Vic Tane's displeasure. But the production is plagued by accidents which would easily have killed a person without super-powers, and, suspecting treachery, Linda fakes fear for her life and quits. Eve takes her place, and is endangered by another mishap. Supergirl saves her and unmasks Nicky, a press agent, as the culprit, who was out to revenge himself on the director for marrying the girl he loved. Eve resigns the role in favor of the real Supergirl, who completes the movie herself.

The planet Thetoa and Earth have an exchange student program in which Asborg College student Enora Doruu is to be exchanged via teleportation for Supergirl. However, Enora has been kidnapped by the Disruptor League, a group of student radicals. Her place has been taken by Agent 9K, a Linda Danvers lookalike, who uses a Neuro-Scon device to agitate students' minds and make them riot on campus. Supergirl has been struck by a hypnotic beam from Agent 9K that inhibits her from leaving the Asborg campus. But she travels back in time to a point at which Thetoa occupies a different space, and, the campus having left her, is free of the compulsion. Supergirl returns to Earth, frees the students of the Neuro-Scon, and captures Agent 9K.

Retrieved from "https://heykidscomics.fandom.com/wiki/Adventure_Comics_Vol_1_391?oldid=1399523"
Community content is available under CC-BY-SA unless otherwise noted.