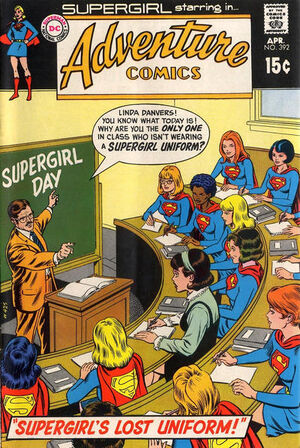 An International Athletic Competition is being held in California, and Supergirl has learned that two Ionian agents intend to use any means necessary to stop American athletes from winning, so that Ionia may score an athletic and propaganda victory. Thus, Linda Danvers uses her super-powers (and Comet) to triumph over her rivals in preliminary bouts of track, swimming, and horse-jumping. Once at the games, Linda wins two of the three events, using only as much skill as her rivals from Stanhope College possessed. But she has to take a loss when struck by an electric bolt in the swimming competition, or be suspected of being Supergirl. Later, she tricks the Ionians into exposing their hand in public, captures them, and explains (as Supergirl) to her three college competitors that Linda had some super-aid to win the contests. The three girls are allowed to compete in a make-up round of the games, to be held later.

TV producer Dale Baxter cooks up a scheme to discover which girl at Stanhope College is Supergirl so that he may expose it to the world in a top-selling TV special. His gimmicks include electrified belt-buckles, a barbell weighing half a ton, and costumes chemically treated to burst into flame at a certain time, except if neutralized by sweat--and, since super-beings presumably do not sweat, Supergirl's will be the only costume aflame. Linda Danvers checks him at every opportunity, with each scheme costing Baxter a lot of bucks. His final scheme costs him all his remaining money, and nearly gets him in trouble for attempted manslaughter. But Supergirl believes that bankruptcy and a busted ego are enough problems for Baxter at the moment.

Retrieved from "https://heykidscomics.fandom.com/wiki/Adventure_Comics_Vol_1_392?oldid=1399525"
Community content is available under CC-BY-SA unless otherwise noted.