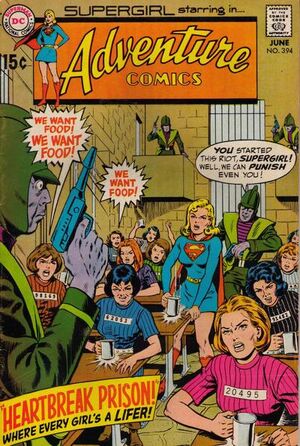 But the whole thing seems awfully familiar! A girl and her pet... A metal man... A cowardly beast... And all the rest!

Appearing in "The Mysterious Motr of Doov"Edit

Synopsis for "The Mysterious Motr of Doov"Edit

Supergirl and Streaky are sent to another dimension by a mysterious tornado. There they encounter the robot Cresa, the fearful, satyr-like Chalom, and the neon-being Poxar, and follow a crimson rainbow trail to the lair of the Motr of Doov. The Motr says that he abducted them (except for Cresa, whom he built) from other dimensions via his warp-tornadoes so that he could have them ascertain that his old foe, the Wicked One, was no longer in existence. The Motr turns out to be an American man in a top hat, who says that he is not the original Motr, but his assistant, who was brought there in 1898 from Chicago. The original Motr died long ago. As all near the dimensa-geyser that will return them to their normal worlds (at the same time they left), they are attacked by the Wicked One of the West (who was just hiding). Supergirl and Streaky, knocked into the geyser, are sent home. Later, doing some research, Linda Danvers discovers that L. Frank Baum, the author of The Wizard of Oz, lived in Chicago in 1898, and must have been inspired by a tale he heard from the Motr, who had successfully returned to his home city and era.

Supergirl is sent by a mysterious telepathic voice to a world ruled by Tyrox, a tyrant who possesses a deadly Zenith Weapon which threatens the universe. Faking helplessness, she is tried by Tyrox and sentenced to a prison with other super-heroines who have defied him. If any use their super-powers, all the prisoners will be executed. Eventually, Supergirl deduces that the bars of her own prison cell contain the Zenith weapon, and, despite Tyrox's machinations, she and the other heroines escape, defeat Tyrox, and destroy the Zenith Weapon. Supergirl then returns to Earth, and is thanked by the mysterious telepathic voice.

Retrieved from "https://heykidscomics.fandom.com/wiki/Adventure_Comics_Vol_1_394?oldid=1503941"
Community content is available under CC-BY-SA unless otherwise noted.