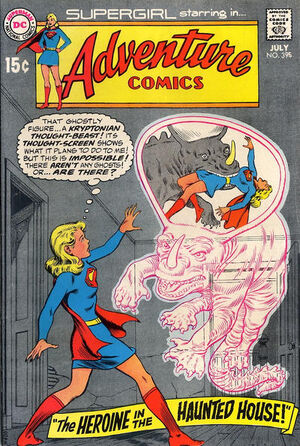 Appearing in "The Rejected Supergirl!"Edit

Synopsis for "The Rejected Supergirl!"Edit

Supergirl is asked to place markers on the nine planets with the names of the top nine most-admired men on the Stanhope campus. In the process, she fights and destroys robotic "Metal Lions" on Pluto. When she comes back, the class votes on the top nine women, and Supergirl places last. Supergirl is miffed, until she discovers that all voted for her first, the

metallic dust on her hair left after fighting the Metal Lions distorted the computer's findings, and that she is actually #1 on their list, with an acrostic spelling out her name.

Appearing in "The Heroine in the Haunted House!"Edit

Synopsis for "The Heroine in the Haunted House!"Edit

When horror-movie actor Vincent Sale goes insane from a horrific thing he has seen in a supposedly haunted house, Linda Danvers tries to earn the $1,000 which will be given to anyone who spends a night in the house alone. She sees ghosts of Jor-El and a Kryptonian thought-beast, and turns into Supergirl. The sights have been created by Jax-Ur and his cronies of the Phantom Zone, whose mental emanations can reach anyone in the house through a custom-made television set created by Amos Ameswell, the supposedly-dead inventor. Supergirl turns off the TV set and banishes the Phantom Zoners. But she is still left with what appears to be the ghost of Amos Ameswell, dressed as Death...and swinging his sickle at her.

Retrieved from "https://heykidscomics.fandom.com/wiki/Adventure_Comics_Vol_1_395?oldid=1400004"
Community content is available under CC-BY-SA unless otherwise noted.