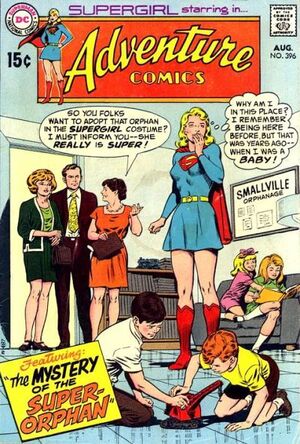 Appearing in "I Am a Witch!"Edit

Synopsis for "I Am a Witch!"Edit

Amos Ameswell challenges Supergirl to break superstitions on this day, Friday the 13th, including spilling a lot of salt. But afterwards, wherever she tries to do a good deed, she ends up wreaking destruction instead. She finally deduces that the "salt" Ameswell had her spill was secretly a powder loaded with his "anti-mass destructive element". Supergirl cleanses the powder from her person and takes Ameswell to jail.

Appearing in "The Mystery of the Super-Orphan!"Edit

Synopsis for "The Mystery of the Super-Orphan!"Edit

A Supergirl robot goes to Smallville on the anniversary of Jonathan and Martha Kent's death, but is confused by the fact that she has the memories of Superboy. Eventually Supergirl and Superman catch up to the robot and restrain it, explaining that she was mistakenly programmed with a Superboy robot tape.

Retrieved from "https://heykidscomics.fandom.com/wiki/Adventure_Comics_Vol_1_396?oldid=1400005"
Community content is available under CC-BY-SA unless otherwise noted.