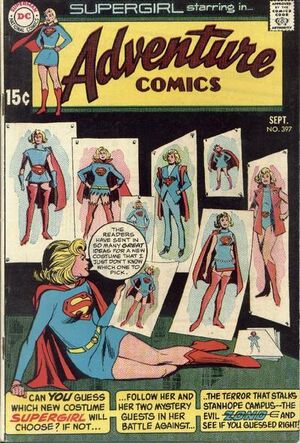 When a girl feels this way -- some new clothes are in order!

-- Linda Danvers, trying to beat a case of the blues

When a girl is found in a zombie-like state on the Stanhope campus, Supergirl goes into a trance and probes her memories. She learns that she was terrified into catatonia by a being named Zond whom she met at a witches' coven. Supergirl tracks down the coven and confronts Zond, but his magic powers defeat her and shred her costume somewhat. Supergirl consults with Diana Prince, the former Wonder Woman, and has her ask her old foe Morgana the Witch for help. Since Zond is a common enemy, and her mother's former stable-boy, Morgana agrees. Supergirl gets a new uniform from Wonder Woman's boutique before she goes with the other women to the next coven meeting. Morganna takes care of Zond's magic, and Supergirl kicks him around the block. Morganna leaves with Zond, but not before releasing his victim from her fear-trance.

Lex Luthor deputizes his niece Nasthalthia, or Nasty for short, to terrorize Stanhope with her motorcycle gang, Nasty's Nasties. Their objective: flush out Supergirl and discover her secret identity. It backfires, as Supergirl tracks down Luthor and imprisons him again. Then she takes Nasty and her gang on a harrowing series of carnival rides, hyped by her super-powers. She warns the gang sternly not to try their terror tactics again, but Nasty later promises to strike again in the future.

Retrieved from "https://heykidscomics.fandom.com/wiki/Adventure_Comics_Vol_1_397?oldid=1503909"
Community content is available under CC-BY-SA unless otherwise noted.