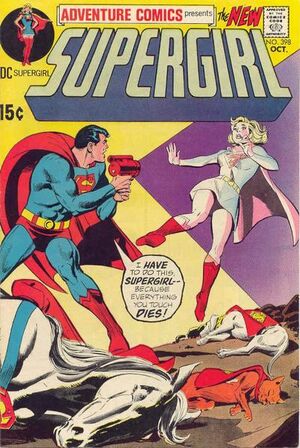 Appearing in "The Maid of Doom!"Edit

Synopsis for "The Maid of Doom!"Edit

This story is reprinted from Action Comics #306.

Appearing in "Catcher in the Sky"Edit

Synopsis for "Catcher in the Sky"Edit

Supergirl, investigating the disappearance of an aircraft carrier, follows two vanishing planes. All of them turn up on the examination table of a gigantic alien child, who has stolen his father's dimensional grappler to bring in objects and tiny people from another dimension. Supergirl gets the attention of the child's father, and, just before they are sent back to their normal dimension, the humans see the child's father giving his son a licking.

Retrieved from "https://heykidscomics.fandom.com/wiki/Adventure_Comics_Vol_1_398?oldid=1400007"
Community content is available under CC-BY-SA unless otherwise noted.