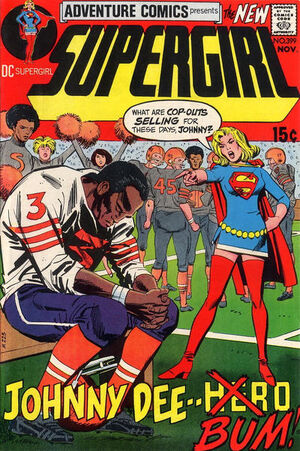 It's bad seamanship to sit on a mooring line! You can be upset so easily!

-- Black Canary, as she pulls on the mooring line and upsets the crook

When a gang of hoods employed by gamblers beat Stanhope College football star Johnny Dee and his girlfriend Roxie brutally, they warn him to throw his next game or risk his girlfriend's life. Johnny obeys, and the opposing team wins. Supergirl questions Roxie and learns the story, but Johnny fakes a stomach upset to get out of playing the next game, against Rawlins College's team, since the gangsters have warned him they will have three snipers present at the game. Supergirl nabs the snipers and the gamblers, and Johnny Dee goes in to win the game for Stanhope.

Appearing in "Television Told the Tale!"Edit

Synopsis for "Television Told the Tale!"Edit

Larry Lance stops by Dinah's flower shop to let her know that Mrs. Landall will be showing off her diamond collection on television today during the boat races, and he'll be at her mansion to help make sure nothing happens. That afternoon, as Dinah watches the show on tv, she notices that the cameraman on the scene is aiming each shot away from Mrs. Landall and focusing on the doors to the home. Something in her mind clicks, and Dinah quickly dons her Black Canary uniform and rushes off to the Landall estate by the lake. When she arrived, Larry and Mrs. Landall were both tied up on the floor with the diamonds missing, and the thieves were making a getaway in a speedboat! Black Canary dives in and manages to climb aboard, informing the thieves that their every action is being taped right now by the camera crew recording the races. Unable to fire their guns at her for fear of drawing attention, they try unsuccessfully to throw her off by speeding up, This however creates a new problem, for if they went faster than the other boats and won the race, all attention would be on them and authorities might discover the stolen diamonds on their speeder. But Dinah kicks the throttle lever so that it breaks off, sending the boat and it's crew careening through the finish line and onto the beach, where police were watching. The thieves are arrested and the diamonds returned. How did Black Canary know that there would be a robbery? When the cameraman focused all his shots on the entrance and exits of the Landall Estate, she realized he was hinting to his men on ways to break in.

Later on, back at the shop, Larry remarks to Dinah how he wishes he could send flowers of thanks to the Black Canary, to which Dinah replies that she's probably already surrounded by flowers.

"Television Told the Tale!" is reprinted in Black Canary Archives #1.

The Black Canary feature in this issue is a Golden Age story that had never been published. Hence the appearance of Larry Lance, who died in Justice League of America #74 back in 1969, a year before this issue came out.

Retrieved from "https://heykidscomics.fandom.com/wiki/Adventure_Comics_Vol_1_399?oldid=1400042"
Community content is available under CC-BY-SA unless otherwise noted.