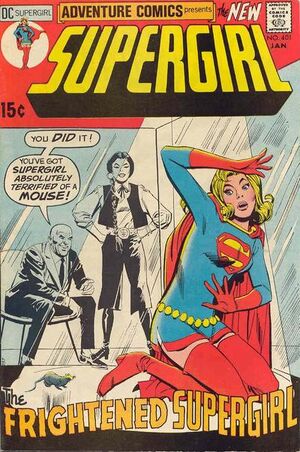 Haunted!? Ghosts?! Nonsense! No such thing as ghosts!

Appearing in "The Frightened Supergirl"Edit

Synopsis for "The Frightened Supergirl"Edit

Supergirl dreams that Nasty and Lex Luthor have dosed her with a "fear-serum" that causes her to rampage through Stanhope, terrified of a spider or a mouse or a toy car. Linda

wakes up and discovers it has only been a dream.

Appearing in "The Strange House"Edit

Synopsis for "The Strange House"Edit

Retrieved from "https://heykidscomics.fandom.com/wiki/Adventure_Comics_Vol_1_401?oldid=1517124"
Community content is available under CC-BY-SA unless otherwise noted.