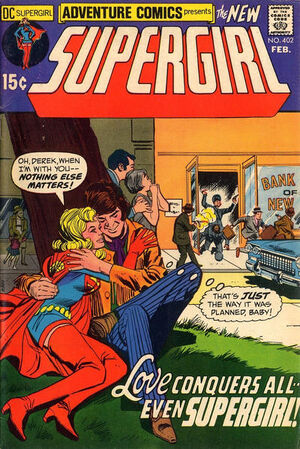 Appearing in "Love Conquers All - Even Supergirl!"Edit

Synopsis for "Love Conquers All - Even Supergirl!"Edit

Starfire, a villainess, employs handsome con-man Derek Ames to meet Supergirl on the Stanhope campus. He romances her, then covertly feeds her a capsule specially designed to negate her super-powers. When Starfire's gang attacks with machine guns, Supergirl feels her powers ebbing, and is knocked unconscious by a fall. Derek and the thugs leave her for dead.

The Starfire in this issue is not to be confused with either the Teen Titan, or the sword-wielding hero from another world.

Retrieved from "https://heykidscomics.fandom.com/wiki/Adventure_Comics_Vol_1_402?oldid=1517125"
Community content is available under CC-BY-SA unless otherwise noted.