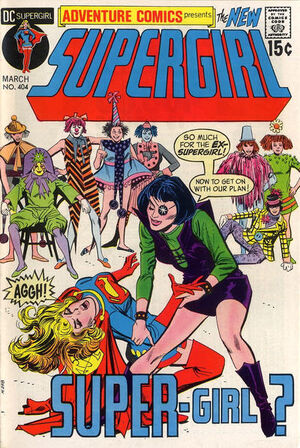 Supergirl revives, discovers her powers have indeed ebbed away, and goes to the bottle city of Kandor for a scientific examination. The Kandorian scientists cannot reverse her condition, and say that she will have "on-again-off-again" super-powers for the duration of its effect. But they design an "exo-skeleta cyborg" for her, worn under her clothes, which gives her some super-strength, and outfit her boots with jets that will allow her to fly when she loses her powers. Starfire rewards Derek Ames, but has him shot seconds afterward when she fears he will expose her operation. Later, Starfire and her all-woman gang pull bank robberies in the neighboring town of Carvale, where a Mardi Gras celebration is going on. Supergirl tries to capture the gang at one robbery site, but her powers are off and the women knock her unconscious. The Girl of Steel is taken prisoner. Later, at her headquarters, Starfire confirms for herself that Supergirl has lost her powers, and delivers a punishing martial-arts beating to her, knocking her out again for a brief time. Supergirl's powers return seconds later, reviving her. She attacks Starfire and her gang, capturing most of the gang members. But Starfire herself and her scientist aide Dr. Kangle escape.

Retrieved from "https://heykidscomics.fandom.com/wiki/Adventure_Comics_Vol_1_404?oldid=1503937"
Community content is available under CC-BY-SA unless otherwise noted.