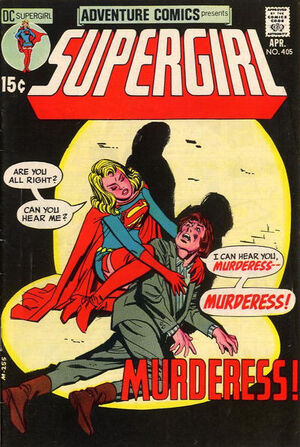 Starfire and Dr. Kangle plot to eliminate Supergirl's powers forever with a stronger dose of Kangle's formula. To get someone to administer it to her, Starfire contacts Derek Ames's brother Rodney. She tells him that Supergirl murdered his brother while maddened by Kangle's serum. Rodney desires vengeance for his brother, and Starfire hands him a gun loaded with capsules of the formula and tells him she will lure Supergirl to Paris. Once de-powered, Supergirl can be killed in any way Rodney chooses. Starfire makes herself visible in Parisian high society. Supergirl, seeing photos of her foe and a story detailing Derek's death, reasons that she had Derek murdered. She goes to Paris to capture Starfire, who is executing the theft of the entire fall fashion line of Paul De Paris, a designer. Supergirl fails to capture Starfire, and Rodney fails to de-power or kill Supergirl. But she convinces Rodney to listen to her side of the story, and that he may be in danger for having failed Starfire like his brother did. When Rodney brings Starfire an apparently unconscious and non-super Supergirl, she has them both thrown in a barred pit and lets in a gorilla to kill them. Supergirl renders the ape unconscious, frees them both, and battles Starfire and her gang. Starfire leaps to freedom from a high window in her castle hideout, landing in the moat. She emerges on shore after Supergirl and Rodney lead Kangle and her gang away.

Retrieved from "https://heykidscomics.fandom.com/wiki/Adventure_Comics_Vol_1_405?oldid=1517120"
Community content is available under CC-BY-SA unless otherwise noted.