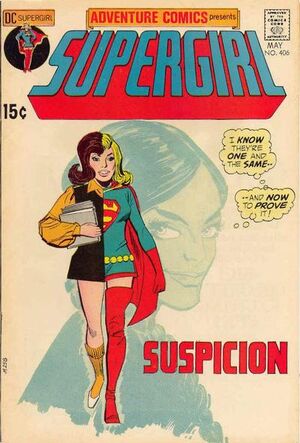 Linda Danvers tries to attend her own graduation ceremonies at Stanhope College, but the commencement is broken up by rioting student radicals. Even worse, Nasthalthia Luthor has seen Supergirl go into Linda Danvers's room and Linda come out. Now convinced that Linda is Supergirl, she intends to tail her until she can prove it to herself--and to Lex Luthor. With some help from Clark Kent, Linda gets a job on the news crew of KSFTV in San Francisco. Unfortunately, Nasty has been listening to her conversation with Kent, and gets herself a job with the same news crew. When Supergirl saves some people from a burning building, to throw Nasty's suspicion off she dresses as Linda Danvers, fakes being overcome by smoke, and lets herself be "rescued" by emergency personnel.

Retrieved from "https://heykidscomics.fandom.com/wiki/Adventure_Comics_Vol_1_406?oldid=1517118"
Community content is available under CC-BY-SA unless otherwise noted.