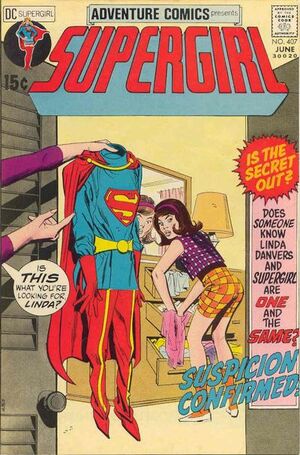 Mr. Renard comes to KSFTV and tells the news crew that he is reopening a theater supposedly haunted by the ghosts of an old film star and the leading lady he murdered. The crew spends two nights there trying to check things out, resulting in Johnny Drew and Nasthalthia Luthor getting kidnapped by a ghoulish figure. Supergirl's powers cut out and she is unable to rescue them. But on the third night they discover that the "haunting" has been arranged by Starfire, who captures Supergirl and tries to dissolve her in an acid bath. Supergirl shields herself with her acid-proof costume, then rescues her friends and captures Starfire and Renard, who had posed as the ghoulish kidnapper.

Retrieved from "https://heykidscomics.fandom.com/wiki/Adventure_Comics_Vol_1_407?oldid=1517119"
Community content is available under CC-BY-SA unless otherwise noted.