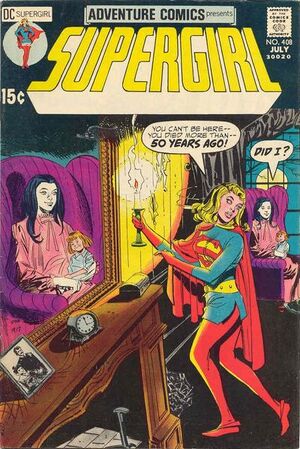 Appearing in "The Face at the Window"Edit

Synopsis for "The Face at the Window"Edit

The KSFTV news crew attempts to make a documentary of the old Stanley mansion and are chased away at shotgunpoint by old man Stanley himself. But Linda has seen a little girl

standing at an upstairs window, and, when she is told that Stanley has lived alone in the house ever since the deaths of his niece and nephew circa 1918, she decides to investigate. (Nasty goes there to try and catch her in an identity switch, but she gets caught and thrown out by Mr. Stanley.) Inside the mansion, Supergirl encounters the little girl, who says she is looking for her parents. Using her super-vision, Supergirl melts away the container which has held the bodies of her parents, John and Elizabeth Stanley, ever since old man Stanley killed them back in 1918. The little girl has vanished, having found her parents. Old man Stanley confesses to the double murder and is taken away by police. Supergirl sees the little girl in a portrait--of Cynthia Stanley, the couple's daughter, who died of influenza shortly before her parents' deaths.

Appearing in "Invasion of the Mer-Men"Edit

Synopsis for "Invasion of the Mer-Men"Edit

While spending the day at the beach, Linda and Johnny Drew are confronted by an invading force of alien Mer-Men. Johnny is kidnapped and Supergirl tries to follow, but her powers cut out underwater and she has to surface. Later, she goes to Kandor and has the scientists implant filters in her nostrils that will enable her to breathe underwater or in space. Neither she nor the police, however, can locate Johnny. And the Mer-Men appear before an assemblage of Earth's scientists and military men to confirm they are stealing Earth's water, and, within a year, will leave the Earth a lifeless desert.

Retrieved from "https://heykidscomics.fandom.com/wiki/Adventure_Comics_Vol_1_408?oldid=1517121"
Community content is available under CC-BY-SA unless otherwise noted.