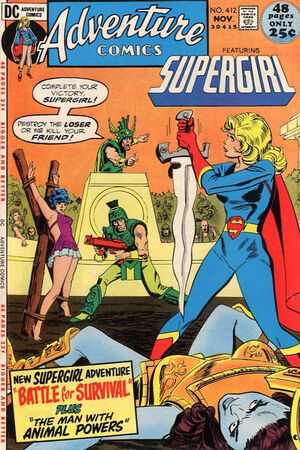 Appearing in "The Battle for Survival"Edit

Synopsis for "The Battle for Survival"Edit

When a girl in a Supergirl costume robs an art dealer, the real Supergirl investigates. Her double proves to be Glynix, who rules her planet of Liquel II with her mate Largyn. They are

threatened by aggression from the conqueror Zogg, and the conflict must be decided by single combat between champions. Since Zogg's champion is a giant blue female warrior with incredible strength, Supergirl has been chosen by Glynix. Supergirl agrees to battle, goes to Liquel, and fights Zogg's champion. After a brutal battle, Supergirl finally prevails. However, custom calls for Supergirl to kill her opponent with a sword, and the Girl of Steel refuses. By their law, that means Glynix must be executed in her place. Supergirl appeals to the populance watching the contest, gains their loyalty, and has them proclaim that both Glynix and the female giant must live. But both Glynix and Supergirl are astonished to see Zogg and his army confronting them with Glynix's mate Largyn at Zogg's side. Shamefacedly, Largyn confesses that he didn't think Supergirl had a chance, and agreed to cede control of Liquel II to Zogg in return for high government posts for himself and Glynix. Supergirl intervenes, taking Glynix out of harm's way, and disarms Zogg's army. After Zogg hits Supergirl with a stunning blast from an outlawed weapon, Largyn attacks Zogg and the two, wielding knives, fall into a moat. Largyn emerges alive. Supergirl returns to Earth.

Appearing in "I Was the Man With Animal Powers"Edit

Synopsis for "I Was the Man With Animal Powers"Edit

Retrieved from "https://heykidscomics.fandom.com/wiki/Adventure_Comics_Vol_1_412?oldid=1517122"
Community content is available under CC-BY-SA unless otherwise noted.