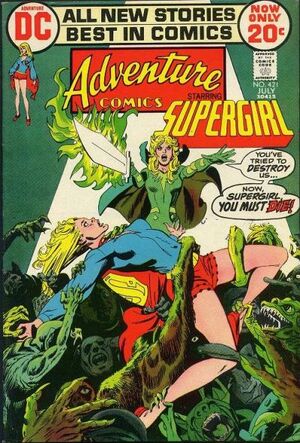 An amazon named Nightflame wielding a sword with awesome energy-powers appears in San Francisco, raises havoc, and demands that Supergirl be brought to her. She locates the Girl of Steel at KSF-TV, renders her unconscious, separates her spirit from her body, and flies off. When Supergirl awakens, she is beset by demons and Nightflame, who tells her that she is now on a world that exists only in an atom of her brain. The "innerverse" is sustained by evil, and her choice to do good is eating it away. Nightflame intends to make her choose evil, take over her body, and become the new Supergirl. But mental contact with Geoff Anderson helps Supergirl throw off Nightflame's influence. In the end, Nightflame, the demons, and the "inner world" are destroyed, and Supergirl revives. She kisses Geoff gratefully.

Appearing in "The Brave and the Broken"Edit

Synopsis for "The Brave and the Broken"Edit

Zatanna gives a private eye who has lost his nerve a lesson in courage.

Retrieved from "https://heykidscomics.fandom.com/wiki/Adventure_Comics_Vol_1_421?oldid=1400030"
Community content is available under CC-BY-SA unless otherwise noted.